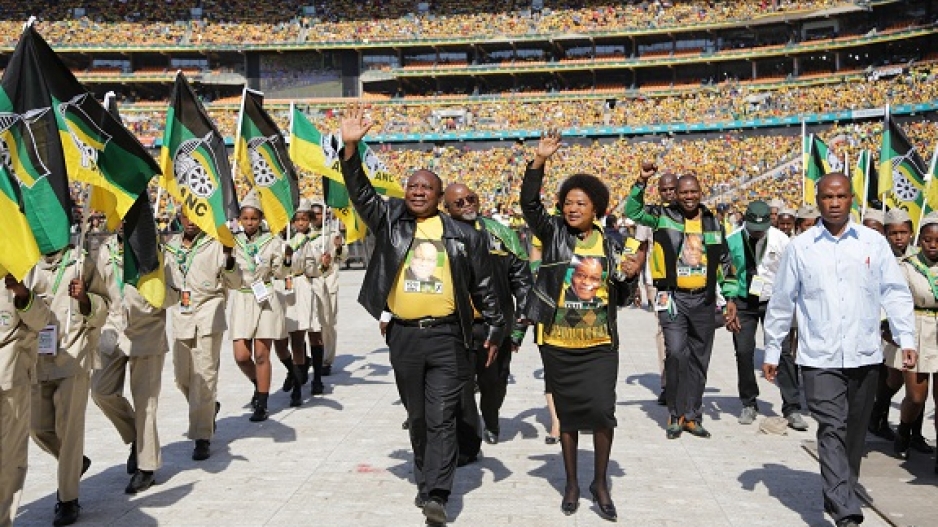 ANC deputy president Cyril Ramaphosa (C-L) waves to supporters as he arrives during the ANC's final mass election rally at Soccer City Stadium in Soweto, 4 May 2014.

JOHANNESBURG - Some are calling it the return of the prodigal son.
The man that Nelson Mandela originally wanted to be his deputy president is poised for a sensational return to government.
Cyril Ramaphosa, who was announced as the country&39;s deputy president on Sunday, rose to prominence in the trade union movement after graduating from the University of the North with a law degree.
He worked as a legal advisor for the Council of Unions of South Africa in 1981 and was instrumental in forming the National Union of Mineworkers in 1982, serving as its first general-secretary.
Ramaphosa then helped form the Congress of South African Trade Unions (Cosatu) in 1985. &39;Cyril&39;s time has come&39; - watch the video above.
For the rest of the decade Ramaphosa cut his political teeth by leading rolling mass action in the mining sector, bringing the apartheid economy to its knees.
When Cosatu joined forces with the United Democratic Front against the National Party government of PW Botha, he took a leading role in what became known as the Mass Democratic Movement.

And as Mandela walked to freedom, Ramaphosa was at his side, offering a brief glimpse into what the future held.
After the ANC’s unbanning, Ramaphosa was elected secretary-general of the party in 1991.
He then became head of the ANC’s negotiation team at Codesa – the process that signalled the eventual fall of apartheid.
Ramaphosa was seen by many as Mandela’s right-hand man, destined for greater things if Madiba had his way.
But in 1994, when Ramaphosa lost out to Thabo Mbeki for the position of ANC deputy president, his political future changed direction.
He went on to become a member of parliament and with his NP counterpart Roelf Meyer drafted South Africa’s internationally acclaimed constitution that was adopted in 1996.
But just a year later he turned his back on politics and entered the world of business.
Despite some early setbacks Ramaphosa became an empowerment icon.
He amassed a fortune reported to be close to R5-billion in companies ranging from McDonald&39;s and Standard Bank to Coca-Cola and MTN.
He remained a member of the ANC’s National Executive Committee throughout this time.
He was still seen by many as a seasoned politician waiting for the right moment return to the political arena.
His image took a massive dent though with the Marikana killings in August 2012, when 34 illegally striking platinum workers were gunned down by police on the North West platinum belt.
In the weeks after the shooting it emerged Ramaphosa had shares in Lonmin -- the mine where the industrial action was taking place.
And the day before the killings he had sent e-mails to Police Minister Nathi Mthethwa calling for swift action against the miners following several deaths during the strike.
Only months after the massacre Ramaphosa was appointed ANC deputy president at the party&39;s Mangaung elective conference -- sold as a solid running mate for President Jacob Zuma’s push for a second term.
Since then his profile had been building as he canvassed support and campaigned for the ANC.
Now, at 61 years of age, he will become the country’s number two.
After an absence from public office of almost two decades, many people have been left wondering what role Cyril Ramaphosa will fulfil in President Zuma’s second administration.
More importantly, after making his name as a trade unionist and then going on to become a billionaire businessman, which skills he’ll be employing in his new post?