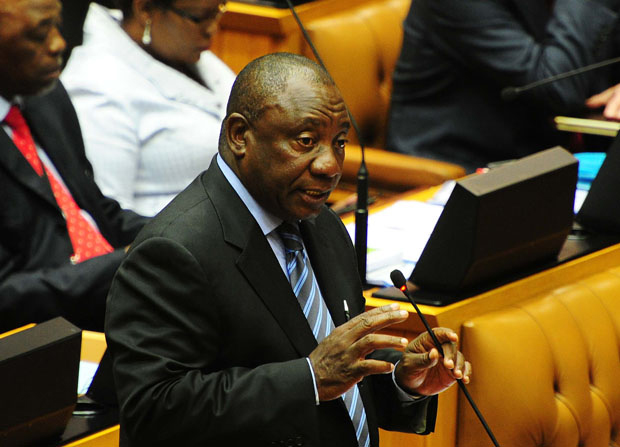 JOHANNESBURG -- There is no truth to reports that Deputy President Cyril Ramaphosa met with business people to discuss Cabinet appointments, according to the Presidency.

Reports in the New Age and the Sowetan claimed that Johann Rupert, Maria Ramos and Trevor Manuel, had met with Ramaphosa, in a bid to reverse the appointment of Des Van Rooyen as Finance Minister in December.

The Deputy President has described the reports as "wholly incorrect, mischievous and misleading".

In a statement issued through the Presidency, Ramaphosa claims he only participated in a meeting of the ANC Top Six, which preceded Van Rooyen being replaced by Pravin Gordhan.

The government has now asked The New Age and the Sowetan newspapers to withdraw their reports about the alleged meeting.

Read the Presidency&39;s full statement below:

Pretoria- In response to a number of media queries regarding the allegation that Deputy President Cyril Ramaphosa met with business people including Johan Rupert, Maria Ramos and Trevor Manuel following the appointment of Des Van Rooyen and the subsequent appointment of Pravin Gordhan as Minister of Finance, the office of Deputy President Ramaphosa wishes to put the following on record:

1. Deputy President Ramaphosa categorically denies ever having such a meeting with Johan Rupert, Trevor Manuel and Maria Ramos or any other business persons to discuss cabinet appointments

2. The only time Deputy President Ramaphosa engaged himself with the matter of the finance ministry was during the meeting of the top six ANC officials with  President Jacob Zuma on the Sunday leading to the appointment of Pravin Gordhan as the finance minister.

3. The suggestion therefore that Deputy President Ramaphosa met with Johan Rupert, Trevor Manuel and Maria Ramos to reverse decisions of the President on the finance ministry is thus wholly incorrect, mischievous and misleading.

4. Accordingly, it is unfortunate that those who peddled these falsehoods did not find it within their obligation to verify the facts with the office of the Deputy President before setting on publishing the story.

5. It is our conviction that those who published these untruths will find it within their conviction to place correct facts at the disposal of the public.