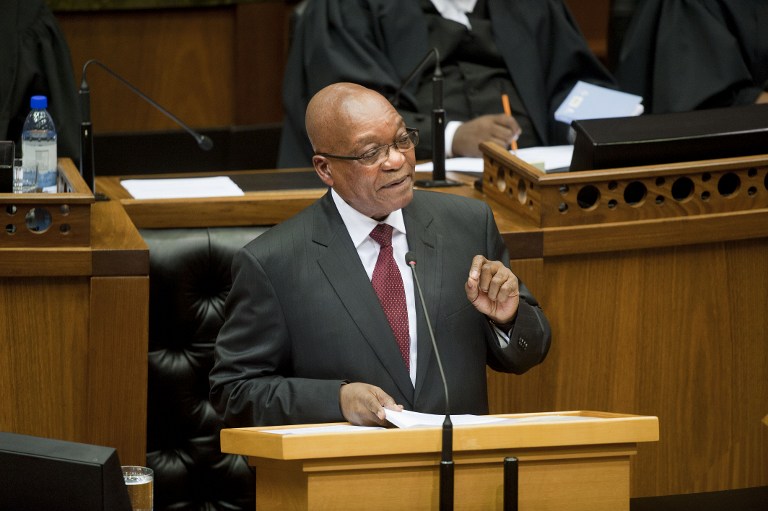 South African President Jacob Zuma delivers the State of the Nation Address during the 20th annual Opening of the South African Parliament, on February 13, 2014, in Cape Town.

"He tried to ride on the coat tails of his predecessors. Yes, we acknowledge that South Africa is a better place to live in, but is it better than 2009 when [Zuma took office]?"

Mazibuko claimed Zuma had reversed the gains made by his predecessors, Nelson Mandela and Thabo Mbeki. She said he found "creative ways" to piggy-back off them.

Under Zuma 1.4 million fewer people had jobs. Mazibuko said this could not be called a success.

"It was pretty dismal," she said, referring to his speech.

Holomisa said Zuma painted a rosy picture of the country, but this was contrary to what was actually seen.

Holomisa said Zuma had no plans to create the number of jobs that he set out to in his address.

"This is an old story, we have heard this noise before," he told reporters.

President Jacob Zuma did not do enough to address job shortages in his state-of-the-nation address, Democratic Alliance leader Helen Zille.

"Work opportunities are temporary replacements... while very important to relieve poverty, they are not a substitute for real jobs that happen because of economic growth," she said.

She said Zuma&39;s speech mentioned that 500,000 jobs had been created, but said this fell short of his promise of five million.

"Only one out of 20 of those jobs materialised."

Labour regulations had deteriorated, which could stifle job growth.

On corruption, she said Zuma needed to "put his money where his mouth is".

"[Zuma] refuses to go to court to answer his own charges," she said.

On the other hand, ANC secretary general Gwede Mantashe had only good things to say about President Jacob Zuma&39;s state-of-the-nation speech on Thursday.

It showed the "coherence" of the work government had been doing in the past five years, said Mantashe.

One of the most important topics Zuma touched on was that of violent protests.

Zuma said government was working on curbing the employment of unqualified people in municipalities.

Mantashe agreed, saying municipalities were the face of government and that quality of services at municipal level needed improvement.

"Do not give any unqualified person a job," said Mantashe.