Red October: The Plight of Whites in the New South Africa 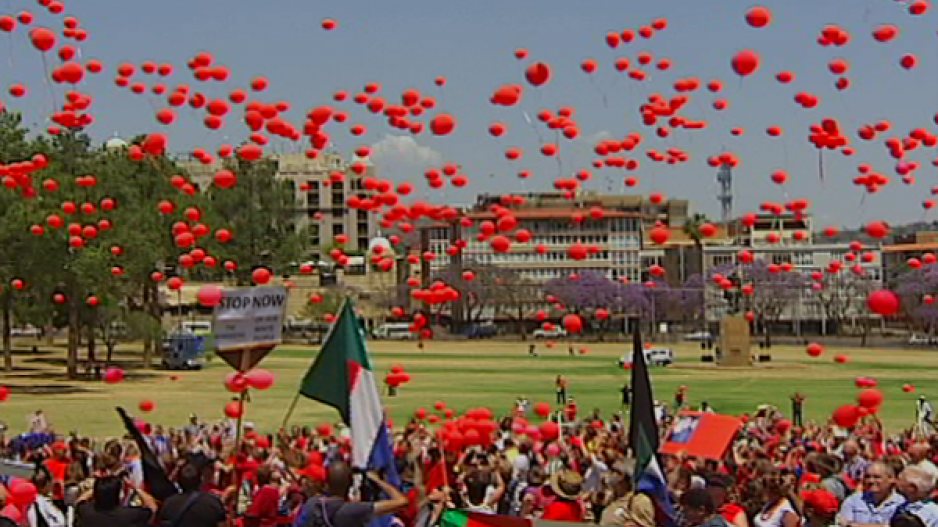 JOHANNESBURG - Approximately 250 protestors clad in red and brandishing balloons of the same colour hit the streets of Pretoria on Thursday demonstrating against white genocide.

Red October aims to draw attention to oppression of and violence against White South Africans.

It was a protest that was mirrored in cities across South Africa - and in some around the globe.

“This is an international call to action. It’s time we make a stand and tell our government that enough is enough,” Sunette Bridges, Red October organiser and Afrikaans singer told the mostly white Afrikaner crowd.

“17 of our people are murdered every month by a black person. Now I can only imagine the international outcry if 17 black people a month were murdered by a white person.”

The march took place on what has traditionally been celebrated as Kruger Day, the birthday of Boer resistance leader Paul Kruger.

And although right wing mainstays such as the Vierkleur old South African flags were widespread among the protestors, organisers claim the march was solely about fighting for minoritity rights.

"We are marching to prove that there are South Africans left who won&39;t acclimatise to the sub-standard."

The group also delivered a memorandum calling for an end to black-on-white violence and what it deems as reverse discrimination in the health, education and employment sectors.

But in spite of claims, the march itself was very much about the rape and murder of white people at the hands of black people.

Marchers held up placards and posters depicting farm murders and decrying the alleged savagery that is meted out to whites by blacks.

“When a white person gets murdered by a black person its normal – its crime. But when a black gets killed by a white, then its racism and persecution,” Willem Bester told eNCA.

“I am here today to say that this is not right. We cannot be simply slaughtered like animals.”

But Red October’s facts and figures are disputed.

A 2009 analysis by the SAPS of police murder dockets show how that in 86.9% of murder cases, the victims were black.

While whites only accounted for 1.8% of the cases – even though they make up over 8% of the population.

I don&39;t hear any RedOctober outcry for the MURDER of Rosemary Theron, OR is it because she was murdered by WHITES? DearSteveHofmeyer