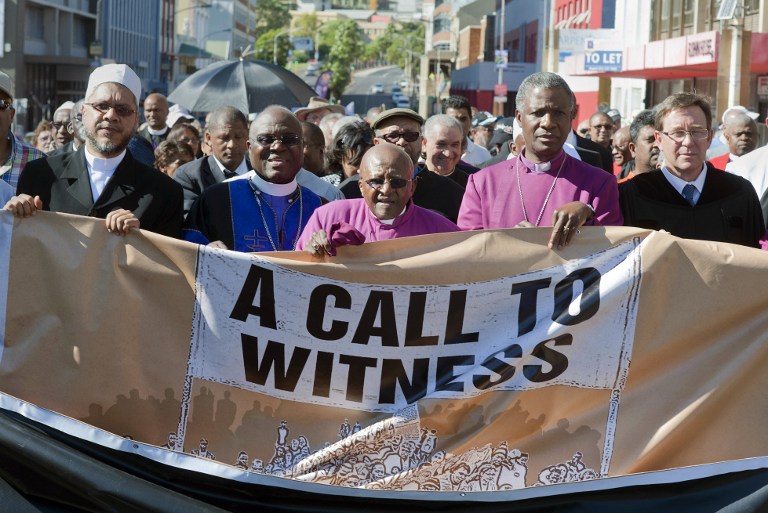 Anglican Archbishop Emeritus Desmond Tutu joins other religious leaders and civil society on a march called "Procession of Witness" in defence of the role of the Public Protector Thuli Madonsela (not visible), in uncovering corruption on April 19, 2014.

CAPE TOWN - Religious leaders from various faiths, including Archbishop Emeritus Desmond Tutu, marched to parliament on Saturday to speak out against poor leadership.

Members of the Muslim, Christian and Buddist faiths joined the call for the protection of Chapter 9 institutions, as well as an end to corruption and maladministration in government.
Anglican Archbiship Thabo Makgoba took President Jacob Zuma to task for his response to criticism of expensive renovations to his Nkandla homestead in KwaZulu-Natal.
"In the face of the nation’s questions to our president on the international embarrassment we call the Nkandla question, he has opted for silence. Unfortunately those advising him have forgotten the admonition... silence screams the truth," Makgoba said.
"I, like many, want to believe our president when he said that he didn&39;t rob Treasury. But if he didn’t, did he hold the ladder?"
Public Protector Thuli Madonsela has condemned Zuma for not monitoring upgrades to his residence more carefully. Madonsela said security modifications were estimated to cost the taxpayer R246-million.
Madonsela has ordered Zuma to repay a percentage of the costs, but Zuma has so far ignored such calls.