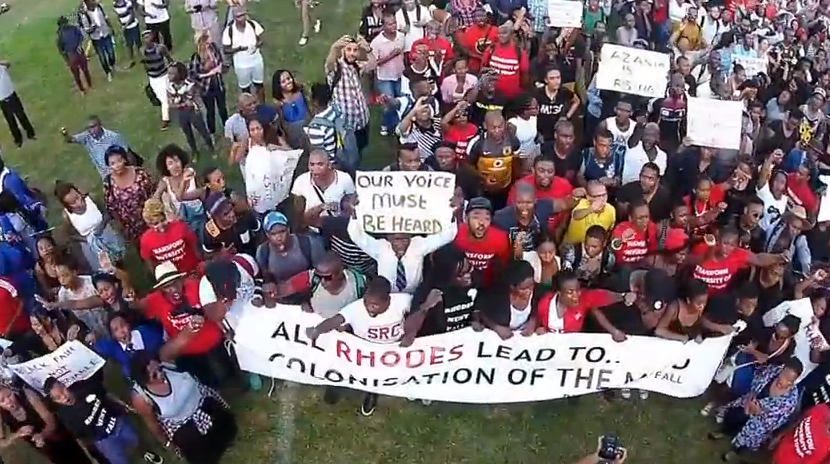 10 April 2015 - The statue has finally fallen - Rhodes does not look over UCT Rugby grounds any more.

“If they are concerned about inequality, they should be celebrating our protesting. Instead, they ignore our presence,” said RMF member and UCT Masters student Brian Kamanzi.

So it has come down to RhodesMustFall students at UCT disrupt a lecture on inequality by ThomasPiketty.

Alongside Piketty — who was patched in via livestream — was UCT’s Associate Professor Debbie Collier, the University of the Western Cape’s Professor Olajide Oloyede, and Stellenbosch University’s Kholekile Malindi.

Kamanzi said Manuel chose to ignore the RMF members at the beginning of the lecture when they stood quietly in front of the audience assembled in UCT’s Jameson Hall.

“He had the opportunity to engage with us but chose not to,” said Kamanzi.

During Collier’s presentation on inequality, RMF members marched into the hall and onto the stage signing liberation songs.

When Manuel intercepted and requested RMF members refrain from protesting, the students disregarded him.

Kamanzi added that UCT, the audience, and the panelists were hypocrites. Adding that workers — who were most affected by issues of inequality — were made to stand outside and not participate in the discussion.

A conversation that excluded the complainants reinforced the very arrogance of power that birthed rhodesmustfall https://t.co/izFkYviLYV

Maybe discomfort could have been spared if a talk focusing on inequality would have afforded a voice to those fighting it? RhodesMustFall

Asked about a similar incident with UCT’s Barney Pityana, an important figure of the Black Consciousness Movement, who the RMF demanded must leave the stage at a discussion — Kamanzi said the movement did not see it as disrespecting struggle stalwarts.

Does rhodesmustfall disrupters of Piketty video link at UCT even know what his theories are & what he said about Marikana?