Rhodes VC in the line of fire 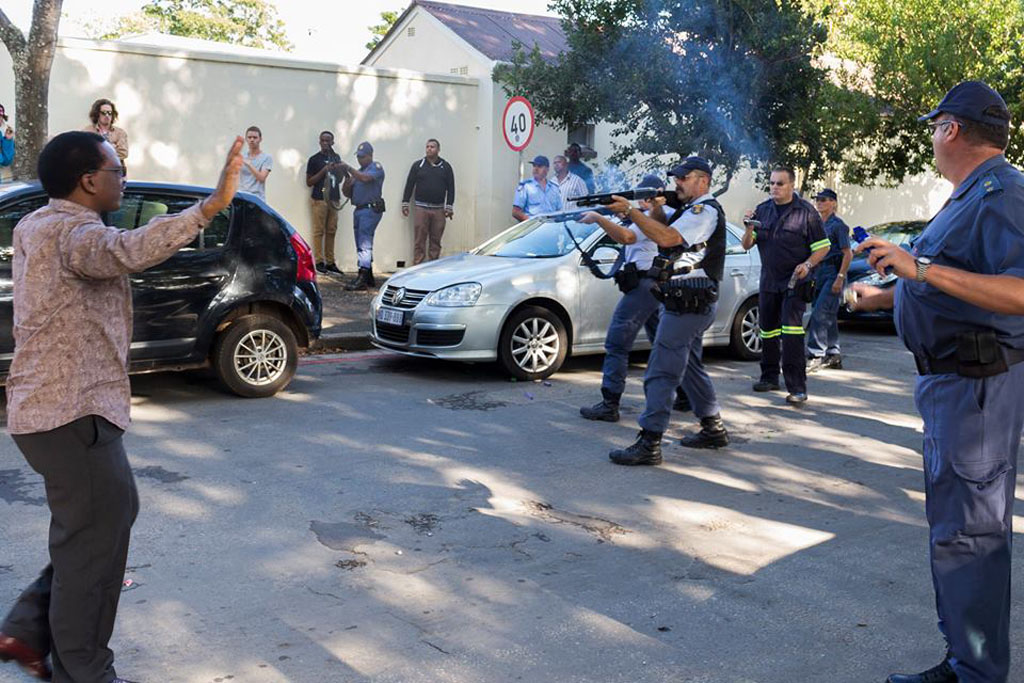 This is the powerful image posted on social media, that painted a clear picture of the troubled situation in Grahamstown.

Vice-Chancellor Mabizela calling for the police to stop. pic.twitter.com/olkjM3ZQgx

Joshua Stein, a third year journalism student at Rhodes University, captured the moment. He describes the chain of events that led to the arrest of five students and a clash between police and protestors.

"It started off relatively calm. The police were talking to the protestors and trying to get them to clear the street. Things became a bit more heated when they said that they [the students] were not going to move."

Rhodes university student pulled to the ground by police as they arrest her and other protesting students , Rhodes University, grahamstown, South Africa, April 20 2016. Students are protesting against how rape is handled on campus and in South Africa by authorities. photography photojournalism protest grahamstown students RUreferencelist police pepperspray

A photo posted by Joshua Stein (@joshstein100) on

"The roads were blocked off (by) furniture, brooms, sticks and stones. Following warnings by the Saps to disperse, the crowd did not adhere to the instructions," said police Captain Mali Govender in a statement.

Pepper spray and stun grenades were then used to disperse the crowd.

It was after the officers began firing rubber bullets that Stein captured Mabizela with his hands raised, begging officers to stop shooting at the students.

Mabizela also unsuccessfully tried to persuade the police not to arrest anyone.

The five accused students have been released on a warning, until further investigation.The students will appear in court on 20 July.

The Grahamstown Magistrate&39;s court has released the five students on a warning.

They must reportedly also comply with additional restrictions including not leaving the Eastern Cape without informing the court; and have been told not to take part in any unlawful protest action until they have appeared before court on 20 July 2016.

The Daily Dispatch meanwhile is reporting that th university has been granted an urgent interdict prohibiting students or anyone else aligned with the current protest from intimidating, assaulting or threatening any member of the university community.

According to the SRC, academic activities at the institution have been suspended for the rest of the week and classes will resume on Monday, 25 April.