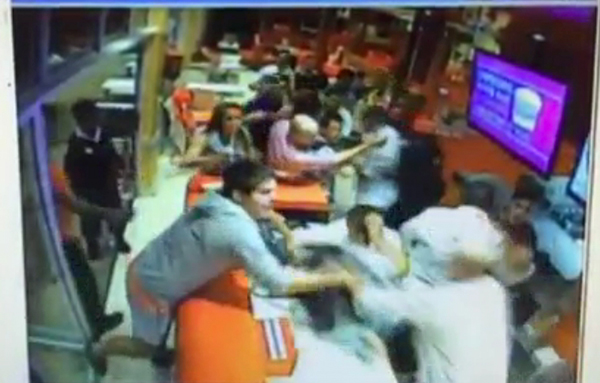 Twenty-one-year-old Agathagelou, a student from North-West University, accused Kriel of attacking her while she tried to break up a fight at a Wimpy restaurant.

The fight broke out after a rugby match between students from North-West University and UCT.

In an affidavit on website dontparty.co.za Kriel said he had been partly blinded and was unaware that his attacker was a woman when he threw a right-hook at Agathagelou, who had been hitting him.

Kriel&39;s affidavit read, "At that stage a police women standing at the counter started to spray those involved in the scuffle with, what I presume was, pepper spray. I was sprayed on my face. This blinded me and I struggled to breathe. Someone, whom I could not see, continued to attack me and I lashed out blindly at my attacker to try and fend off the attack."

In the affidavit Kriel further apologised for his part in the scuffle and to Agathagelou for having punched her.

Potchefstroom police spokesman Thulani Ngubane said, "Police were called to the scene at the Wimpy after receiving a complaint about the fight. They broke up the fight. Nobody was arrested.

"No case has been opened against Kyle Kriel and police are not investigating the matter."

Kriel&39;s lawyer confirmed that the contents of the affidavit were accurate and provided a copy of the document to eNCA.com (see below), although Ngubane said police had not seen it.

Last week a video of the scuffle went viral on social media.

eNCA.com tried to obtain comment from Agathagelou but she had not responded at the time of publishing this article.