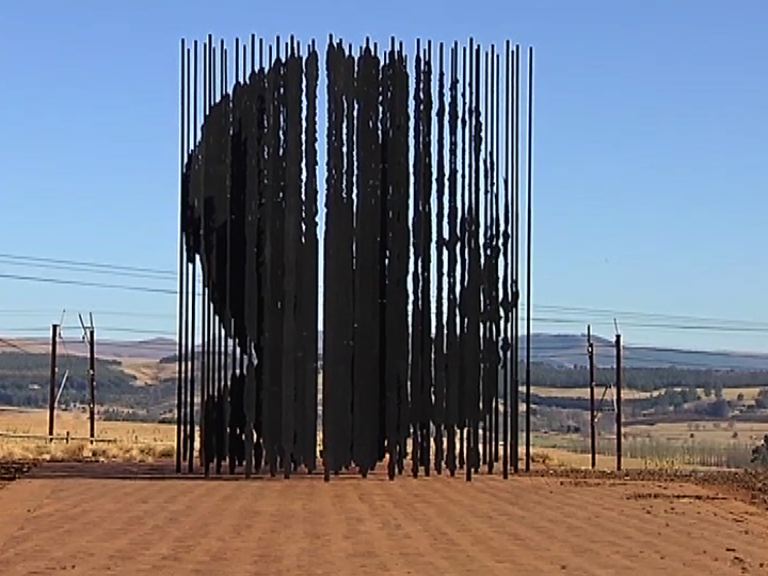 JOHANNESBURG - The world joined South Africa in mourning for former president Nelson Mandela on Friday, as the country began a long, near-resigned farewell that will see him buried in Qunu next Sunday.

They came to Mandela&39;s home in Houghton, Johannesburg, where he died on Thursday, with simple gestures of candles and flowers, while world leaders from Washington to the Vatican hailed him as a gift to all humanity.

"He achieved more than could be expected of any man," said President Barack Obama, who will fly to South Africa next week to pay his respects to Mandela.

President Jacob Zuma announced that Mandela will be given a state funeral in Qunu -- in the Eastern Cape, where he grew up -- five days after an official memorial service at the FNB stadium in Johannesburg.

It will be a week of national mourning, with Mandela lying in state at the Union Buildings in Pretoria from Wednesday to Friday.

"The outpouring that we experience locally and abroad was unprecedented. It demonstrates the calibre of leader that was Madiba," Zuma said of Mandela&39;s universal appeal -- manifested in banners put up from Paris to Beijing -- after visiting Mandela&39;s widow Graca Machel in Houghton to pay his respects.

The street outside has been a pilgrimage site since Thursday night, like the house in Vilakazi Street in Soweto, on the other side of Johannesburg where Mandela once lived with his second wife Winnie Madikizela-Mandela.

As mourners danced and sang there, a woman told reporters Mandela was "like Jesus number two".

At the scene, former director general in the presidency Rev Frank Chikane said he wanted to encourage South Africans to remember Mandela with pride, not sadness.

"We aren&39;t here to mourn him, but we are here to celebrate him."

In Cape Town, thousands of people bearing flowers and South African flags packed the Grand Parade for a prayer service. It was there that, with the world watching, Mandela made his first speech as a free man in 1990.

Well-known South Africans shared their anecdotes of Mandela, including Planning Minister Trevor Manuel who recalled how serene he was on the night before his release from prison after 27 years.

"He was in his pyjamas... clear, rational. He knew what he wanted. In control. All of that on the night before his release."

He added: "I know I am not special -- anybody who was touched by Madiba would have these kinds of memories."

Former speaker of Parliament Frene Ginwala remembered how Mandela argued for reconciliation within the ranks of his party, saying that the alternative would be to "inherit a nation in ruins".

Former president Thabo Mbeki said it was with "a very heavy heart" that he mourned Mandela, while suspended Congress of SA Trade Unions general secretary Zwelinzima Vavi told reporters that although South Africans had long been braced for Mandela&39;s death, it still came as a blow.

"The big tree under whose shade we have hidden for 67 years of service to human kind has fallen," he said in a statement.

"For many months now, we had been preparing for this unavoidable passing of the colossus. Yet, now that this moment has arrived, we find out that we are not ready to let go of a man who was larger than life."

As celebrities and politicians took to Twitter to pay tribute, Pope Francis sent a message of peace and condolences to all South Africans.

"I pray that the late president&39;s example will inspire generations of South Africans to put justice and the common good at the forefront of their political aspirations.

"With these sentiments, I invoke upon all the people of South Africa divine gifts of peace and prosperity."

Former United States president Bill Clinton led tributes on Twitter, simply saying he would miss "my friend Madiba", while Hollywood actor Leonardo DiCaprio wrote: "A hero, we honor. MT @NelsonMandela When a man has done what he considers to be his duty to his people&country, he can rest in peace Madiba."

Anglican Archbishop Emeritus Desmond Tutu told reporters in Cape Town that Mandela had given South Africans the gift of their own potential.

"He taught us to come together and to believe in ourselves. We are fantastic people, Madiba has reminded us [of] that. God is asking us South Africans, please become what you are."

But Tutu said his friend and comrade was not a saint, and used the remark to take aim at the African National Congress.

His flaws included, Tutu said, a "steadfast loyalty to his organisation and some of his colleagues who let him down".