SA comparison to Zim 'an honour' 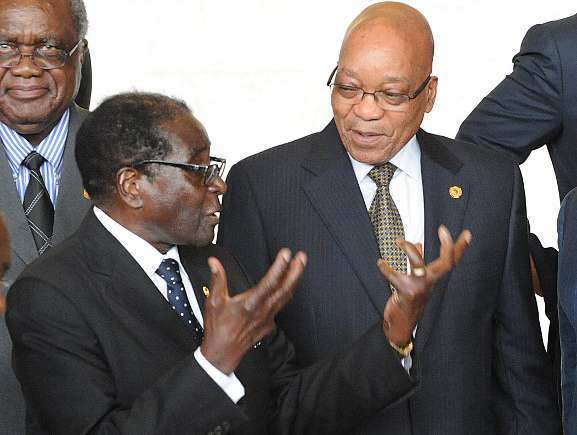 Parliament - It is an "honour" to have South Africa&39;s land reform process compared to what happened in Zimbabwe, Land Reform Minister Gugile Nkwinti told MPs on Friday.

"[President Robert] Mugabe is reversing what the British did to the people of Zimbabwe. It&39;s an honour," he said in the National Assembly following an often angry and emotion-filled debate on his department&39;s 2013/14 budget.

Nkwinti was responding to remarks made earlier in the House by Freedom Front Plus MP Pieter Groenewald, who warned the minister he was "playing with fire" by whipping up emotions on the land issue.

"You are creating insecurity. I want to say to the honourable minister, you are creating a typical Zimbabwe situation. You are busy, before the election, to blame whites and apartheid [for the land situation]," Groenewald said.

Nkwinti told Groenewald he was right.

"You were right... about whipping up emotions, just like Zimbabwe. Yes, President Mugabe is the president of Zimbabwe, and here we have President Zuma. But he [Groenewald] says we&39;re like him [Mugabe]. That is a praise, by the way."

At this point, Nkwinti was interrupted by loud cries and heckling from opposition benches. The minister responded to these by repeating he considered the comparison with Zimbabwe to be praise for the work government was doing on land reform.

"Yes, it is praise... he [Groenewald] says we&39;re like Zimbabwe. That is praise, thank you very much. It&39;s an honour. It is an honour. What did you expect?

"Would you have been happier if he [Groenewald] had said, we were like the British colonialists who killed South Africans to take our land? Would that have been an honour?" Nkwinti asked, to loud cheers from ANC benches.

Earlier, he spelled out government&39;s aims on land reform and the future of South Africa in this regard.

"The Mangaung conference of the ANC has given us very clear instructions on this -- go and change the skewed land ownership pattern in South Africa so that we can have black people taking control of the economy of the country," Nkwinti said, to loud acclamation from ANC MPs.

The emotive tone of the debate was sparked earlier by outgoing Democratic Alliance MP Atholl Trollip, who fired a final stinging broadside against rural development and land reform officials.

"Regrettably, due to the shocking work ethic of your staff, I leave here with the queries I inherited from my predecessor -- and those that were generated during my time in the portfolio -- mostly unanswered."

Trollip is leaving Parliament to take up a seat in the Eastern Cape legislature. He took over as DA spokesman on rural development and land reform last year, after losing his position as parliamentary leader to Lindiwe Mazibuko.

Delivering his last speech, he told Nkwinti his department was failing.

"This department is failing to meet its enormously important mandate. This regrettable state of affairs could not come at a worse time... the centenary of the passing of the 1913 Native Land Act."

He told MPs the minister had conceded that 90 percent of the department&39;s land reform programme projects had failed.

"This failure has provided those that prey on the resources of the state easy access to a source of ready cash.

"The so-called recapitalisation programme, set up to resuscitate commercial farms that this department has allowed to fall into unproductive disrepair, has become a veritable cash cow for corrupt officials and their cohorts."

Trollip suggested Nkwinti focus on the "facts" in agriculture. These included that the contribution of agriculture to South Africa&39;s GDP had dropped from 9.1 percent in 1965, to less than two percent last year.

"[Further], the number of commercial farmers has gone from 100,000 to 36,000 in 15 years. These are the people that feed the nation, who employ hundreds of thousands of people. But they are disappearing," he warned.

"This is your responsibility, and you are failing them dismally. If you are honest, honourable minister, you will have to admit you are not producing new, competent commercial farmers, or competent small-scale farmers through the land reform programme."

Other important facts constraining the department&39;s ability to deliver included successive qualified audits by the auditor-general; financial irregularities that had prompted an SIU investigation; huge claims against the department resulting from negligent and slipshod legal proceedings; and, persistently high levels of irregular, fruitless, and wasteful expenditure amounting to R83.4 million in 2011/12.

Trollip said his experience of interacting with department officials had been one of frustration "as a direct result of ineptitude, carelessness, lack of Batho Pele, lack of professionalism, lack of integrity, and blatant dishonesty".

He then took his farewell.

"Honourable members, it has been an honour serving with you only when we were honest with each other," he told MPs.