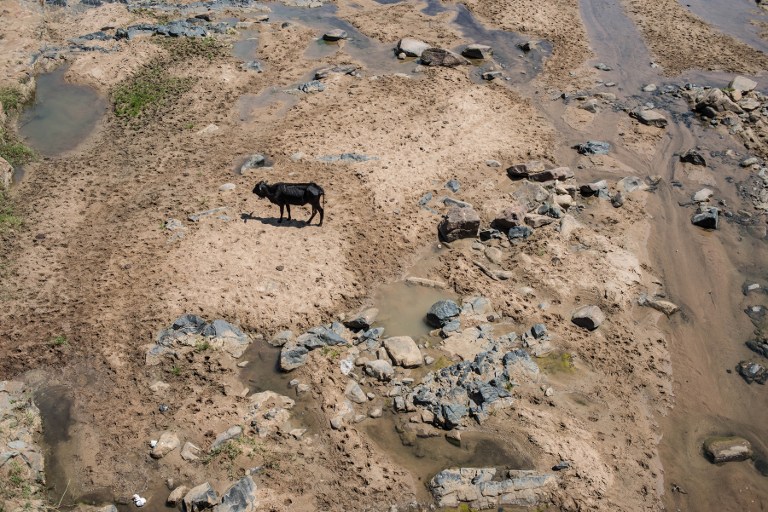 A cattle roams through the dried up Mfolozi River in Ulundi, KwaZulu-Natal, as a severe drought affects South Africa.

POLOKWANE – Veterinary services expressed fears that livestock near the border would be exposed to foot and mouth disease as Zimbabweans allegedly cut down border fences to access greener pastures.

Limpopo Veterinary Services said on Wednesday that the drought affecting the region also threatened Zimbabwe farmers, and they were allegedly pushing their “starving livestock” into South Africa across the Limpopo border to graze in South Africa’s grassy areas on the shoulder of the Limpopo river.

Limpopo, along with other provinces were battling to cope with the severe drought that has seen thousands of hectares of grazing land destroyed.

Records indicated that at least 3000 cattle have died due to the drought over the past months.

Rising fears were that desparate Zimbabwean farmers could inadvertently spread foot and mouth disease when they bring their cattle across the border into the province to graze.

Limpopo Agriculture MEC Joy Matshokge on Wednesdsay said – after meeting with the portfolio committee on Agriculture – that “they (Zimbabwean farmers) are cutting the fences because of drought to allow their cattle to come and graze in our area.”

Matshokge said foot and mouth disease cases had increased, “especially in the areas that border with Zimbabwe, of which the increase was fueled by animals mixing with wild animals”.

Nearly 150km of grazing on the shoulder of Limpopo river has been declared a redline for foot and mouth disease.

Matshokge added that the department was working to “make sure that all those livestock that “mixed with Zimbabwean” animals were placed on a quarantine and scrutinised before they are released back to [their] owners.

Farmers and the department were working to address the impact of the drought on their livestock.

Matshokge, however, said the department was struggling because their disaster relief funds had been exhausted, and they were awaiting more relief funds to continue the battle to save livestock.

There have been Fights over grazing grounds between South African and Zimbawean livestock owners. Farmers have accused each other of stealing cattle and goats.

Matshokge noted that concerns about how informal livestock farmers would cope with severe drought conditions have resurfaced.

She said the Department of Agriculture was engaging with the South African National Defense Force on issues over operating and controlling the borderline to ensure that impact is minimised.

Zimbabwe authorities could not be immediately reached for comment.