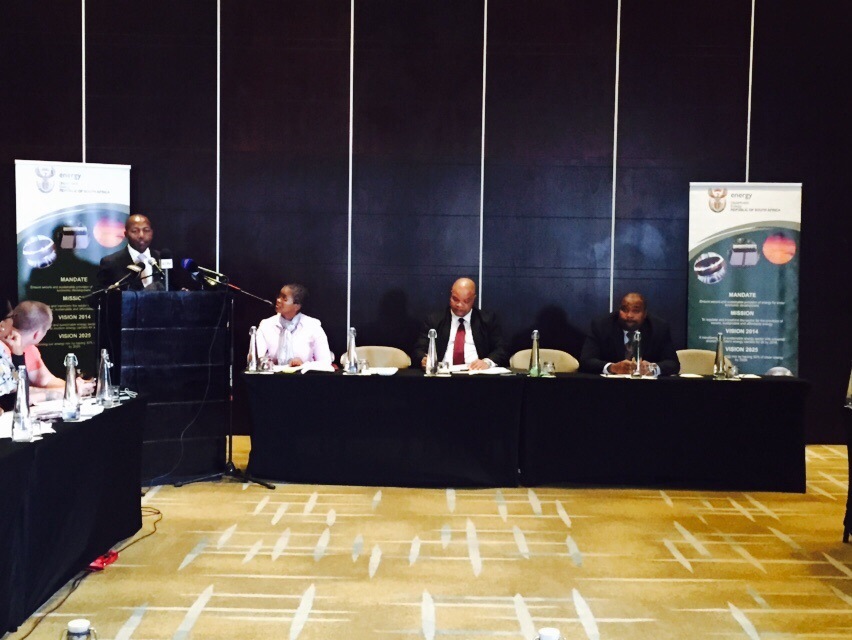 Government officials at a briefing on the nuclear energy build programme in Durban, KwaZulu-Natal.

This was the update provided by the Department of Energy’s deputy director-general for nuclear energy, Zizamele Mbambo, at a government briefing on Tuesday afternoon in Durban.

Mbambo gave an update on the number of South Africans involved in skills development and training with the different vendors:

Russia: Offered 10 scholarships for master’s degrees in nuclear technology. Training of an additional 200 South Africans will be covered by new agreements signed recently.

South Korea: Three students graduated with master&39;s degrees in nuclear engineering in 2013 and this year.

However, a number of questions still remain about the government’s nuclear plans:

Who will get the contract?

The Department of Energy has signed inter-governmental framework agreements with South Korea, Russia, China and France. Since then, a number of vendor parade workshops were done with nuclear companies from these countries.

The next step in the process is the procurement phase. The government announced at the briefing that it plans to implement the approved procurement process that will be competitive, cost-effective and in line with legislation.

It says procurement will begin this month and be completed by the end of the 2015 financial year. A strategic partner/partners will be selected.

There has been much speculation that Rosatom, the Russian State Atomic Energy Corporation, will be the preferred bidder as new memorandum of understanding documents were signed with them last week.

“There is much more detail in the Russian agreement than in the others and it suspiciously already includes details of the government&39;s nuclear build plan, which the other agreements do not,” said Dominique Doyle, energy policy officer at Earthlife Africa Johannesburg, a local environmental justice group.

However, government denies this and says the agreements are just part of the process. Watch Mbambo explain in the video below:

How much will nuclear energy cost?

South Africans are still in the dark regarding how much the nuclear build programme will cost taxpayers.

“It is important to note that government is still to negotiate the price tag in the procurement process which is why exact figures for the study cannot be made available to the public at this stage,” Mbambo told Tuesday&39;s briefing.

The SA Nuclear Energy Corporation said the figure of R1-trillion cost reported in the media was “unfounded”, because by international comparison, it was inconceivable that the nuclear build programme would cost that much.

A nuclear reactor for KZN?

The government announced at the briefing that nuclear sites will not only be at Thyspunt, in Cape Francis in the Eastern Cape but also potentially in the Northern Cape and KwaZulu-Natal.

This news came as a surprise to environmental groups.

Senior climate and energy campaign manager at Greenpeace Africa Melita Steele said the announcement that KwaZulu-Natal might be a site for a nuclear reactor is "outrageous".

“Greenpeace finds it ludicrous that KwaZulu-Natal was also mentioned today as a potential nuclear site, when at no stage has this been included in any of the environmental impact assessment documentation, which points to a clear lack of transparency and clarity,” she said.

Earthlife Africa Johannesburg also said they were disturbed to hear that KwaZulu-Natal was a possible site.

“Parliament&39;s select committee on economic development clearly stated on the 2nd of August 2011, that for KwaZulu-Natal, no suitable sites were identified, due to the high population density and regional seismic activity,” she said.

Regarding KZN being a potential earthquake zone, on November 8, 2013, a special report by the joint standing committee on intelligence was presented to Parliament about security measures at Nkandla.

The report recommended the security upgrade because the province is at risk of earthquakes: “In terms of natural hazards, Nkandla can be susceptible to strong earthquakes on an average (of) one earthquake every 50 years, with occurrences at 5-6 Richter scale.”

Who will pay for damage caused by a nuclear accident?

It’s not yet clear who will be responsible for the costs to repair damage caused by radiation if there is a nuclear accident.

In last year&39;s agreement signed between Rosatom and Minister of Energy Tina Joemat-Pettersson it states that South Africa will be “solely responsible” for any damage caused within the country’s borders and externally.

At the briefing on Tuesday the government released part of the Integrated Nuclear Infrastructure Review mission which a peer review assessment about the country’s readiness compiled by the International Atomic Energy Agency.

Recommendations in the document suggest that South Africa should urgently amend nuclear legislation: “South Africa should explicitly address the Fundamental Safety Principles, including assigning prime responsibility for safety to the (nuclear reactor) operator.”

The government responded that the National Nuclear Regulator Act (1999) and the Nuclear Energy Act (1999) are both under review.

“If South Africa was to have a nuclear accident at Koeberg nuclear power station, Eskom would be liable (as the owner and operator), but only up to R2,4-billion,” said Steele.

The current levels of liability are “wholly inadequate” she said.

For any costs above R2,4bn, the state would have to make up the difference through income from taxpayers.

“This exposes South Africans to huge amounts of risk, particularly since Japan&39;s budget note in 2014 set aside R68-billion for reconstruction after the nuclear disaster at Fukushima,” said Steele.

In February this year Greenpeace Africa filed papers to the North Gauteng High Court to compel Joemat-Pettersson to update the country’s inadequate nuclear liability regulations, which haven’t been updated for more than 10 years.