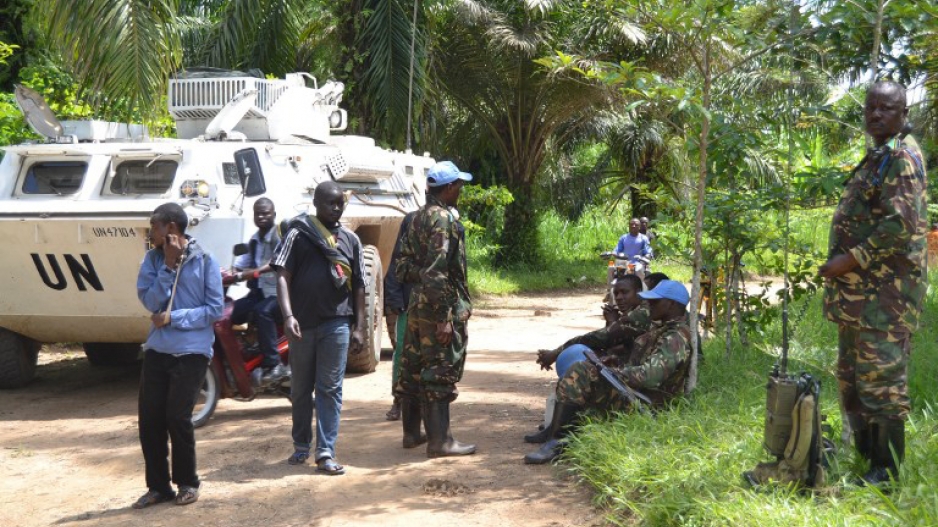 UN peacekeepers of the MONUSCO force stand next to a UN vehicle, after the bodies of seven people were found on May 9, 2015 in Matembo, 12 km from the city of Beni, in the North-Kivu eastern province.031215

GOMA, Democratic Republic of Congo -- “We managed to pin down the enemy; as such we managed to retake the base that was taken by the armed group, suppressing the enemy and inflicting casualties.”

This was how Colonel Bayanda Mkula, commander of the SANDF contingent in the Democratic Republic of Congo (DRC) described intense Monday clashes in the eastern DRC after an army base belonging to peacekeepers was attacked by an armed group.

According to the United Nations (UN), the Ugandan-based rebel group Allied Democratic Forces (ADF) launched an attack on a UN Organisation Stabilisation Mission (MONUSCO) in the DRC in Makembi, North Kivu.

In a statement condemning the assault, UN Secretary-General Ban Ki-Moon’s office said: “One peacekeeper from Malawi was killed and another wounded during heavy exchange of fire. Four Armed Forces of the Democratic Republic of the Congo (FARDC) soldiers and a number of civilians were also killed in two other ADF attacks in the area.”

The armed group has been launching a series of attacks in North Kivu in recent months, which the UN says “has resulted in more than 500 known civilian deaths since October 2014.”

On Monday, peacekeeping forces called for backup from the South African troops as the Ugandan-based group attacked the base.

The SANDF is in the country as part of the UN peacekeeping efforts, and is the Southern African Development Community’s (SADC) Force Intervention Brigade (FIB).

“Forces were surprised whereby they were engaged in their base and then their commander indicated to me that they are not in a position to hold the armed groups,” said Mkula.

Reinforcements were sent from the two areas launching a counter assault on the ADF.

“Further plans were made to do a follow up on the groupings and then that led to us using the Rooivalk attack helicopters on Tuesday morning,” said Mkula.

He added: “After there was through analysis in the military we managed to locate the enemy and we engaged the enemy.”

But the SANDF said the extent of the damage was not yet clear, neither were the number of casualties, as a result of the running battles that lasted around two days. It is awaiting a battle assessment report.

“The mandate of the force intervention brigade is clear to say ours is to neutralize the external armed groups in the DRC. In terms of chapter seven mandate we have to be robust and offensive,” said the commander.

The bloody battles come as the nearly 1,500 South African troops based in the DRC some love home on Wednesday.

The annual Goodwill Parcel Project, which is aimed at bringing festive cheer to SANDF members on deployment, delivered gift packs for the troops in a celebratory event at one of the key bases.

The soldiers will spend the festive season far from home on duty in foreign lands, working to help restore peace and stability to part of the continent.

“The Goodwill project is to honour you our gallant men and women of the SANDF for your service to the nation and the continent by protecting the territorial integrity of South Africa and beyond,” said Angele Ramphele, general manager of the SA Army Foundation.

“This project is to honour and salute you for your commitment and discipline in carrying out your duties under sometimes difficult circumstances.”

Army generals also used the annual event to warn deployed troops that ill-discipline within the ranks would not be tolerated saying it will be dealt with in the harshest way possible.

Just a few months ago, dozens of soldiers were recalled from the DRC on charges of misconduct and have since been dismissed from the force.

Earlier this year, a UN report, spanning 2010 to 2013, rated South African soldiers as among the worst sexual offenders on UN peacekeeping missions.

“Some of our members, very few, do deviate from the norm and do things they are not supposed to do,” said SANDF major-general Barney Hlatshwayo.

“Discipline should not be enforced by us. It should stem from individual members from their heart - they should understand that discipline remains paramount."

Once the celebrations were done and members received their gifts, it was back to work for troops.