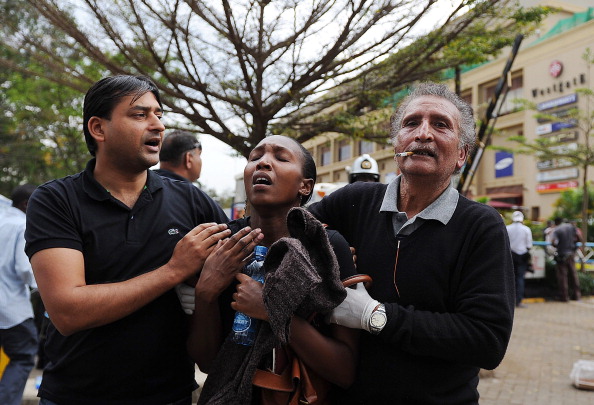 A woman (C) who had been held hostage reacts in shock on September 21, 2013 after she was freed following a security operation at an upmarket shopping mall in Nairobi where suspected terrorrists engaged Kenyan security forces in a drawn out gun fight.

JOHANNESBURG - A South African businessman has died in the Nairobi mall attack, the international relations department said on Sunday.

James Thomas, whose family has been informed of his death, was in Nairobi on business.

Thomas was also the warden of the St Peter’s Anglican Church in Mowbray, Cape Town.

Ratubatsi Moloi, SA High Commissioner to Kenya, had earlier incorrectly stated that a South African woman had been killed in the shooting. The current South African death toll is therefore still one.

"There are still lots of people trapped in the mall. We have identified South Africans we are in touch with. At the moment we have a lady confirmed dead, one lady escaped with two children and a couple was rescued a few minutes ago," Moloi told eNCA.

At least 59 people have been confirmed dead in the attack on the Westgate mall in Nairobi, which started yesterday. A relative of Kenyan President, Uhuru Kenyatta, was also among those who died.

On reports Muslims were spared at Westgate -> RT @HoodaJarjari: Lies....My cousins are still in surgery because of Alshabab.

Nairobi journo killed in westgate attack studied at Rhodes. Condolences to colleagues who may have known her http://t.co/tuZ8wAoROd

*This article has been updated to clarify that a businessman was killed, not a woman.