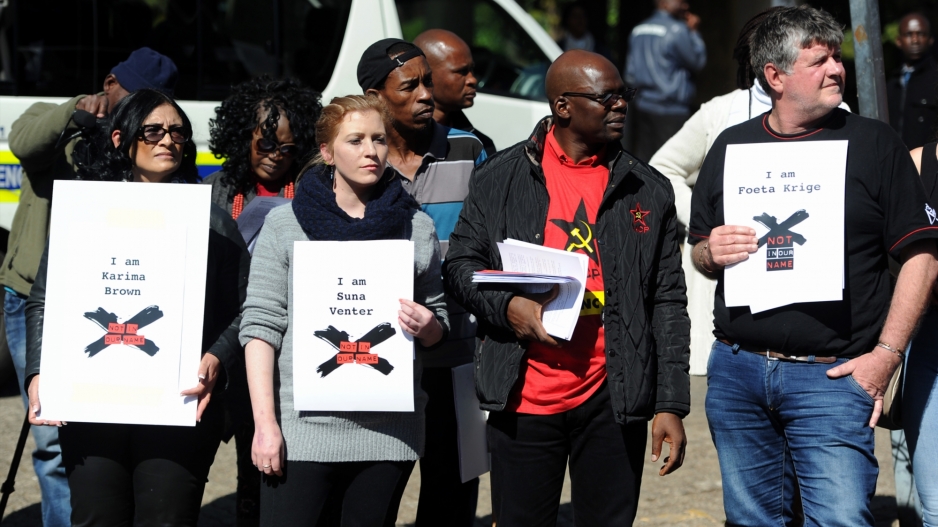 Karima Brown, Suna Venter, Solly Mapaila and Foeta Krige during a recent protest at the SABC.

JOHANNESBURG - SABC management had their decision-making processes put under the spotlight again when the Labour Court ruled their dismissal of four journalists invalid.

The Labour Court, in its judgment on Tuesday, was particularly scathing of the SABC&39;s "reckless disregard" of pending court applications in its decision to terminate the services of four staff members, ordering they be immediately reinstated.

Foeta Krige, Suna Venter, Krivani Pillay and Jacques Steenkamp had filed an urgent application last week to have their dismissals for objecting to the SABC&39;s censorship policy -- since ruled unlawful and retrospectively removed -- set aside.

The four journalists also asked for the names of the officials responsible for their dismissal to be revealed, and that they be made liable for the legal costs of the case.

Judge Andre van Niekerk, delivering the judgment on behalf of Judge Robert Lagrange, ordered that newly-appointed SABC acting head of news, Simon Tebele, and general manager for radio news and current affairs, Sebolelo Ditlhakane, give reasons in writing within five days as to why they should not be liable for the legal costs of the case.

"I am satisfied that there is no question that the applicants should not bear the costs of bringing this application. That this should occur during a time of financial crisis makes it more worrying. The only question is whether these costs should be levied on those who took the decision [to dismiss the four] or on the SABC as an entity," said Van Niekerk.

"Whoever took the decision to dismiss the applicants did so with reckless regard for the pending applications and arguably if a more considered, reflective and financially accountable approach was taken, the SABC would not have proceeded with the dismissals or persisted in opposing the application after agreeing to the order with the Helen Suzman Foundation."

The present crisis began on 27 May when the SABC announced that it would no longer broadcast protests depicting the destruction of state property.

Even the ruling ANC seemed to criticise the decision with party spokesman Jackson Mthembu saying the policy was in conflict with the ANC&39;s stance.

However, Minister of Communications Faith Muthambi has remained steadfastly behind the public broadcaster.

The SABC remained defiant, with COO Hlaudi Motsoeneng saying on 11 July that he would initiate &39;Operation Clean-up&39; to ensure all those unhappy with the editorial policy of the SABC are removed from the organisation.

Protests against the dismissals erupted, followed shortly thereafter by the suspension of Gcubule, Ntuli and Calata.

Mvoku, who served court papers on the SABC last Thursday, said the public broadcaster -- by refusing to renew his contract -- had violated his independent contract agreement with them.

Whether this latest setback sees Parliament or the minister deciding to take action against senior management at the SABC, remains to be seen.

In the interim, taxpayers seem set to foot the bill for the majority of these decisions, while they take comfort that Judge Lagrange&39;s contemplation of personal cost&39;s may stem this outflow.