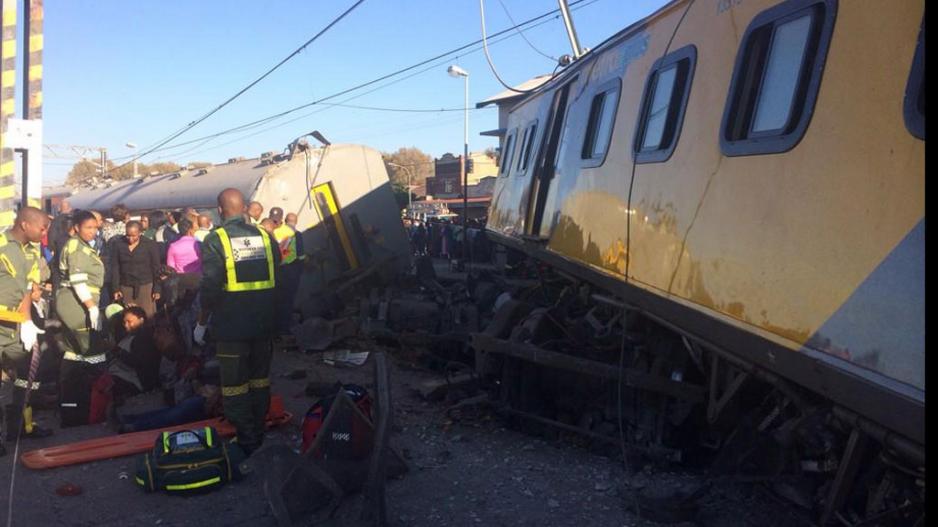 Emergency personnel treat patients injured in a train crash near Denver in Johannesburg on 28 April 2015.

JOHANNESBURG – The scene of a train collision in Denver, Johannesburg will take about six hours to clear, the chief executive officer of the Passenger Rail Agency of SA (Prasa) Mosenngwa Mofi said on Tuesday.

At least one person, a female safety officer, was killed when the two trains collided at Denver station, Mofi said.

The safety officer was at the back of a stationary Metroplus train with around 700 people on board.

Her job was to provide the driver with the all-clear.co

A Business Express train, with about 200 people, crashed into the back of it. Both trains were en route from Pretoria to Johannesburg.

The accident, which left 240 people injured, affected the Germiston-Johannesburg line.

Of those injured, 80 have been discharged from hospital. The driver of the Business Express, a woman, was airlifted to hospital.

“What we are doing is making a full determination of the numbers,” Mofi said.

“The technical team is making a detailed analysis. We will check whether the signals were in order.”

The scene needed to be cleared for the afternoon peak.

Mofi sent his condolences to the family of the woman killed and the families of those injured.