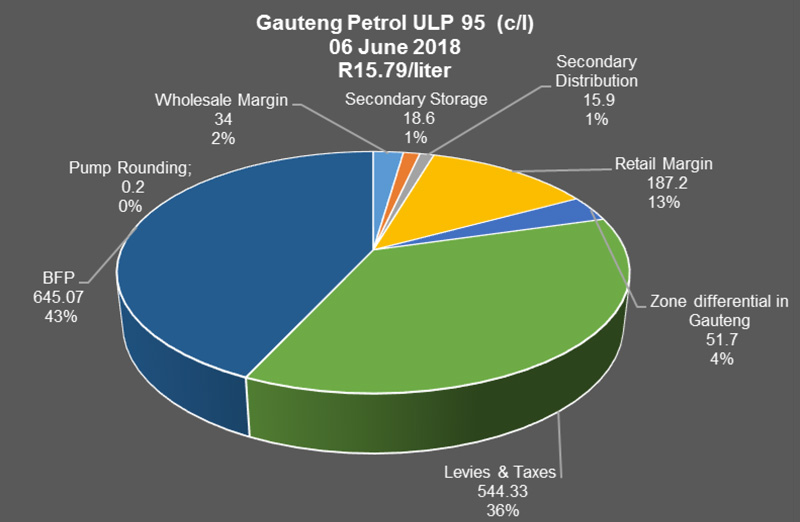 Comparison of composition of the petrol and diesel price in Gauteng.

The increase in petrol prices comes into effect at midnight.

The petrol will increase by 82 cents and diesel by 85 cents.

Comparison of composition of the petrol and diesel price in Gauteng. (Picture: http://www.sapia.org.za/)

In Gauteng, the price of petrol will increase to R15,79 per litre.

Diesel will increase by 85 cents a litre, while the price of illuminating paraffin will rise by 82 cents a litre.

READ: Remember to fill up as the fuel price increases at midnight

"This is the highest ever single increase in the price of petrol in South Africa," Saftu said in a statement.

"These increases will immediately affect workers who have to drive to work or use paraffin for heating. Soon after it is bound to spread to taxi commuters. The National Taxi Alliance is warning that it will have a knock-on effect on the fares commuters have to pay," the union added.

Meanwhile, the Automobile Association of SA said the fuel hike will have a negative impact on consumers.

The association has predicted another increase in July.

How are petrol prices calculated?

According to South African Petroleum Industry Association, the petrol retail price is regulated by the government.

It is changed every month on the first Wednesday of the month.

The calculation of the new price is facilitated by the Central Energy Fund on behalf of the Department of Energy.

The petrol pump price is made up of a number of price elements and these can be divided into international and domestic elements.

There are two factors that influence the price of petrol, namely external and internal.

External factors: The exchange rate - that is the price of the dollar vs the rand.

Internal factors: These include rising prices in crude oil, transport costs, and taxes and levies.