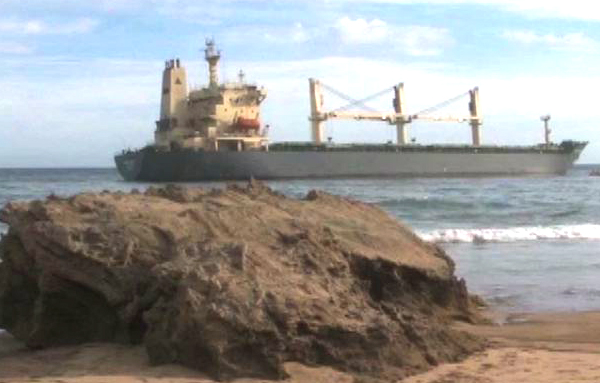 The race to save one of the Western Cape’s most pristine coastlines is underway as salvage crews are trying to prevent further damage to the cargo ship that ran aground near Knysna last week.

The Kiani Satu is leaking vast quantities of oil, and the salvage operations are due to get even tougher with severe weather conditions on the way.

So far, most of the leaking oil is moving out to sea, but the Kiani Satu has more than 300 tons of fuel on board which could pose a threat to the beach of the Goukamma Nature Reserve.

An attempt to get the ship off the rocks has been delayed because of the remote location. Rough weather conditions are further complicating the operation.

A salvage tug is in place to try and refloat the ship at the next high tide.

“The best news we’ve had in four days is that the helicopters lifted the tow rope between the ship and the salvage tug. They are now connected. It’s our intention to start trying to pull the vessel off at 5 on Tuesday morning, which is two hours before high water,” Captain Nigel Campbell of the South Africa Maritime Authority said.

The full extent of the damage can only be assessed once the ship is afloat. In the meantime, estuaries near the ship have been sealed off in an effort to protect the sensitive marine area.