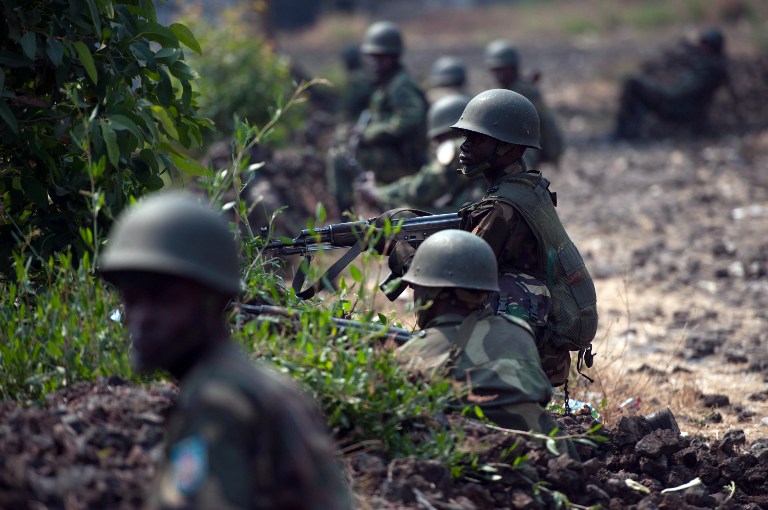 Congolese Army soldiers man a foward position in Kanyarucinya, some 12 kms from Goma, in the east of the Democratic Republic of the Congo on July 16, 2013, as it pursues an offensive against rebels of the M23 movement.

At a press conference on Friday, Mgwebi said the soldiers, who are part of the UN Force Intervention Brigade (FIB) supporting Congolese government troops currently battling M23 rebels near the city of Goma, received minor shrapnel injuries from M23 mortar fire. He said the families of the three soldiers injured had been notified.

But, the chief refused to confirm reports that Rwandan troops were currently assisting M23 forces. He said however, that the FIB would be taking the reports seriously and would investigate.

“These allegations are continuing but we are not the ones to confirm this. It is a serious matter. The politicians must deal with it,” he said.

Mgwebi also failed to confirm whether snipers were used against M23 forces but said that Rooivalk helicopters have provided counterattack support to Tanzanian artillery which is strategically positioned behind government forces.

“I’m not the one deploying. It is a UN [United Nations] mission. We have not provided snipers. We provided a battalion. If they have used snipers, the UN must respond to the question.”

More than 1,300 South African soldiers are stationed in the DRC as part of the FIB.

Mgwebi was unable to clarify any form of military "end game" in the region or when South African troops would be returning home.

“The answer is a political solution. The end game will be decided by the Congolese. For talks to move forward there needs to be encouragement. That is where the military comes in,” he said.