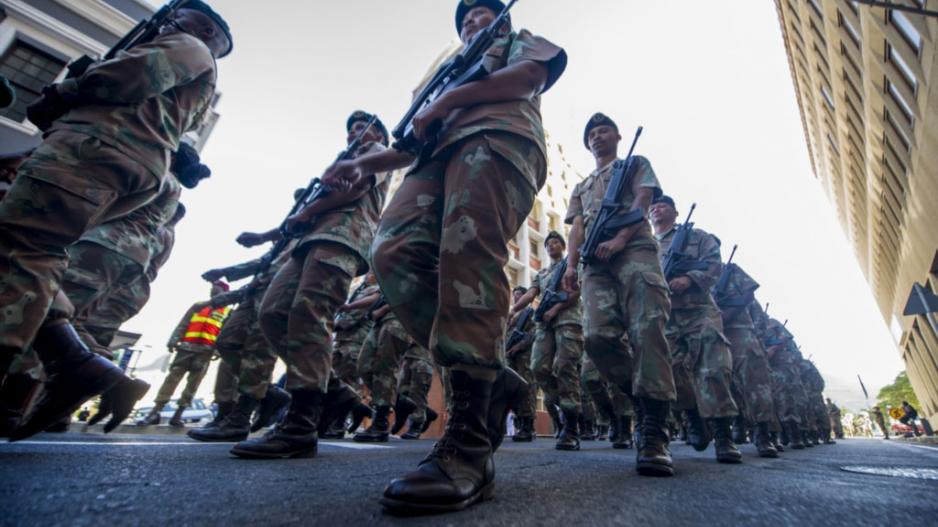 South African Defence Force (SANDF) members parade during a dress rehearsal ahead of the State of the Nation Address (SONA) on February 08, 2017 in Cape Town, South Africa.

CAPE TOWN - The South African National Editors Forum has expressed concern over the heavy police presence in parliament during the State of the Nation Address.

The group has called on parliament’s political and administrative leadership to seriously reconsider and review the progressive “heightening of security measures and securitisation” at parliament.

Sanef says its received complaints from journalists who say they were restricted from doing their work.

READ: Soldiers at SONA there to intimidate: Security expert

The annual State of the Nation adress by President Zuma was described by the ANC itself as anarchy.

LISTEN: Zuma giggles as EFF booted out of Sona

Journalists based at Parliament’s media offices were hampered from leaving and returning to their offices as a line of riot police blocked off the access road. Police also attempted to prevent some photographers from capturing scenes in the precinct, Sanef said.

There appeared to have been confusion by individual members of the security establishment who adopted a haphazard approach and who appeared not to be aware of assurances that the media would not be obstructed.

“Sanef is deeply concerned by these events as we view it as a security crackdown on the media in the wake of the broader securitisation of what ought to be the ‘People’s Parliament’. Security measures, including a greater role played by the State Security Agency, appear to have increased year-on-year since 2015.”

Throughout the build-up to Sona parliamentary officials dismissed all the concerns raised by both the Press Gallery Association (PGA) and Sanef, promising there would not be any restrictions on journalists who were doing their work.

National Council of Provinces Chairperson Thandi Modise on the eve of Sona went a step further, saying Parliament would like the media to do their work “without fear”.

Under clause 4 of the Powers, Privileges, and Immunities of Parliament and Provincial Legislatures Act, security services may only be at Parliament “under the authority” of the presiding officers.

Sanef had always understood and abided by special measures implemented in the past during special events such as Sona.