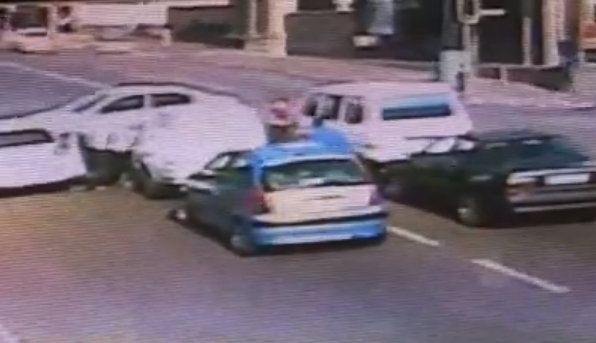 JOHANNESBURG - A second hijacking has been caught on CCTV camera in the Johannesburg CBD.

In the video, which was posted online by a private security firm, a white bakkie is shown waiting at traffic lights at an intersection in downtown Johannesburg.

A white sedan then cuts the bakkie off. Two other vehicles appear to be acting to block the bakkie in, preventing its driver from fleeing.

Armed men then emerge from the car and surround the bakkie.

The hijackers then drive off with the bakkie. The entire operation takes less than a minute.

This follows a similar incident, in which a Toyota RAV4 was hijacked on the  corner of Commissioner and Crown Streets on Saturday.

Both videos are marked by the speed and coordination of the criminals. In the first incident, one man is stationed with an assault rifle to ensure no passersby interferes with the hijacking. In both cases, multiple vehicles are used to prevent the target vehicle from escaping.

Police have said they are investigating the incident.

SAPS spokeswoman Obakeng Mabaso told eNCA that the police do not have any current leads, but confirmed that an investigation had been opened.

An independent security expert told eNCA that the pattern of hijacking in the CBD was not new, but that the media attention has now concentrated police attention on the area.