Senior police officers to be charged over Marikana 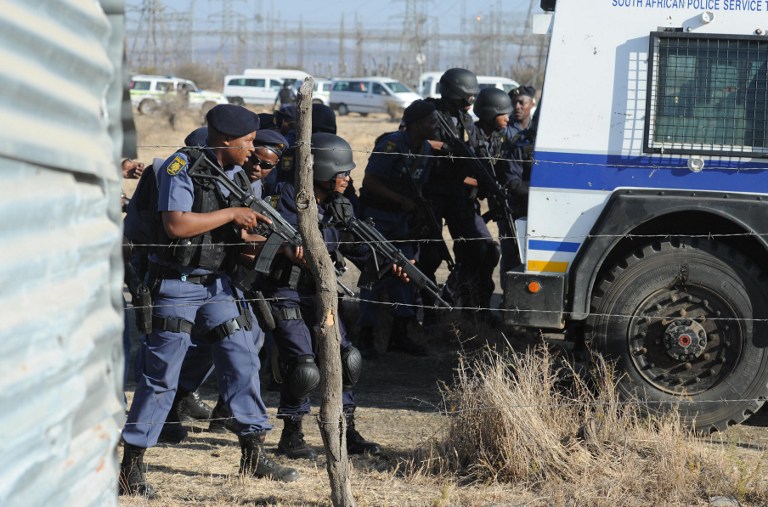 File: In some cases, the police's heavy handedness appear to go too far. Marikana is such an example.

PRETORIA – A number of senior police officers have been charged or are being investigated for various alleged offences related to the violence at Marikana near Rustenburg in North West during August 2012.

This emerged from a statement issued by the presidency on Sunday providing an update on steps taken by government departments to implement the Farlam Commission of Inquiry’s recommendations.

The Farlam Commission – chaired by retired Judge Ian Farlam – was appointed on August 26 2012 to probe the deaths of 44 people during an illegal, violent strike at Lonmin’s Marikana platinum mine earlier that month.

On August 16, 34 people, mostly mineworkers, were shot dead by police. In the preceding week, another 10 people were killed, including two police officers and two Lonmin security guards. The commission’s report and recommendations were released to the public in June 2015.

In the statement on Sunday, the presidency said warning statements had been obtained from senior members of the South African Police Service (SAPS) who were involved in the operation at Marikana during the wildcat strike.

Among others, a criminal case was opened against a major-general in the SAPS for allegedly defeating the ends of justice. He was accused of having failed to exercise command and control at “scene two” of the shooting and belatedly submitted his own firearm for investigation by the ballistic experts, and that the paramedics under his protection were diverted to “scene two” instead of giving medical attention at “scene one”.

A case was also opened against a brigadier for allegedly defeating the ends of justice by failing to secure recordings of an extraordinary meeting of SAPS management. An attempted murder case had been opened for some police officers for the miners who were hospitalised with gunshot wounds on August 13, 2012, as per the directive from the National Prosecuting Authority (NPA), the statement said.

Investigations found a major-general who was responsible for overall command of the SAPS operation at Marikana to have been remiss in his conduct when dealing with the incident of August 13, 2012, which led to the deaths of two police officers and three strikers. He also allegedly ignored the advice of experienced public order police officers on dealing with the crowd control situation and contravened the SAPS standing order number 262 relating to crowd control.

“The officer faces four counts of murder for the deaths of two police officers and two of the strikers and six counts of attempted murder in respect of the five injured miners and one police officer.

“He also faces charges of defeating and/or obstructing the ends of justice, as well as contravention of section 6 (2) of the Commissions Act by falsely testifying at the Farlam Commission and denying his role in ordering the police to fire teargas at the strikers,” the statement said.