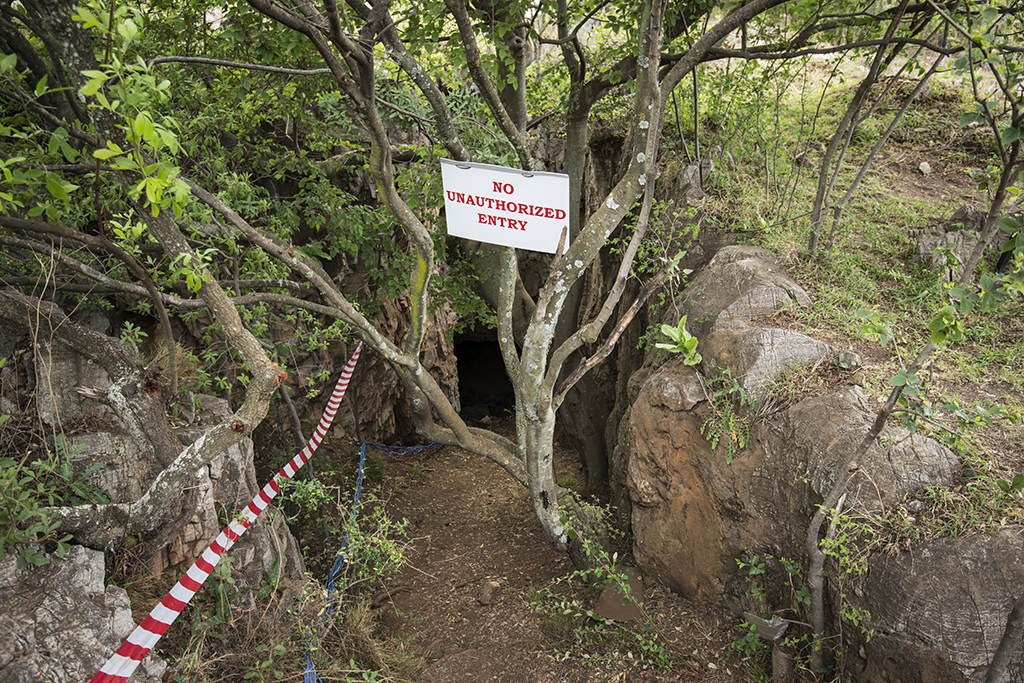 The entrance to the Rising Star cave system where a new hominin species Homo naledi was discovered in 2013.

CRADLE OF HUMANKIND – On Friday 13 September 2013, cavers Rick Hunter and Steve Tucker head out to the Rising Star Cave, 50 kilometres from Johannesburg, on the hunt for fossils.

PHOTO: Steve Tucker and Rick Hunter, the cavers who found the Dinaledi chamber in the Rising Cave system in the Cradle of Humankind. Courtesy: University of the Witwatersrand.

Hunter had posted this status on social media that day, "I have a good feeling this Friday the 13th. Time for fun and adventure. And of course hopefully new discoveries. All cameras are charged and lights are ready. Hammers, chisels, gloves, boots and overalls. This is a deep underground rock session."

This was posted on the Speleological Exploration Cavers Club website.

Little did they know that the superstition would come true when they found the entrance to the Dinaledi chamber, which held a large number of fossils would lead to the discovery of a new species of hominin.

The cave system had only one entrance; a 12-metre long shaft.

The two took photographs of the fossils and showed them to caver and geologist Pedro Boshoff.

Boshoff recognised the fossils as a possibly significant find and alerted paleoanthropologist Lee Berger to the discovery.

Almost exactly two years later Berger, research professor in the Evolutionary Studies Institute at the University of the Witwatersrand and National Geographic Explorer-in-Residence, announced that this discovery led to the identification of a new species of human ancestor, Homo naledi.

PHOTO: A photograph showing the inside of the science tent on day 22 of the Rising Star expedition. Courtesy John Hawks/University of the Witwatersrand.

He led two Rising Star expeditions in 2013 and 2014, which discovered and recovered the fossils.

Berger: In 2013 we went into the Rising Star cave not expecting to make such a significant find @eNCA B4Human

The announcement of the discovery was made on Thursday at the Maropeng Visitor Centre in the Cradle of Humankind.

Read more about the discovery of Homo naledi.

What makes this discovery even more significant is that it would appear the Homo naledi species intentionally undertook the dangerous journey of climbing down a 12-metre shaft in a remote cave to purposefully place bodies in a remote chamber, all in the dark.

This was the conclusion made by a large team of scientists and researchers who were part of the expedition.

Berger: This was not a mass death, Homo naledi buried their own in a cave @eNCA NalediFossils pic.twitter.com/qdCVTYsVlM

Exactly how did researchers reach this conclusion?

Clues forming the answer to this puzzle are listed below:

1. The large number of fossils recovered

While cavers recovered 1,550 bones and bone elements from the floor of the cave chamber, researchers say it’s likely that there are a lot more fossils to be found.

The recovered fossils represent 15 individuals, which is significant because it’s uncommon to find so many individuals in one place.

As there are so many individuals of the same species, Berger said it will most likely become the most well-known and well-researched human ancestor.

PHOTO: All packed and ready to go, transporting the prized Homo naledi fossils. Courtesy University of the Witwatersrand.

2. There’s only one entrance to the cave

The sedimentary (muddy/sandy) characteristics of the ground floor of the chamber show that the entrance used by the cavers Hunter and Tucker is the only entrance to the cave, even at the time the fossils entered the chamber.

“The sediments in the Dinaledi Chamber are different from the sediments in other chambers in the cave in a number of important ways: they are fine-grained and mud-rich, and contain no coarse-grained components; they are relatively poor in quartz; and they are chemically distinct and derived almost completely from the cave itself,” said Berger.

This shows that the chamber was isolated from the earth’s surface and other chambers in the cave.

Berger said that according to the mapping done by the team of researchers, there’s no other direct route into the cave.

“Our mapping indicates that the roof to the Dinaledi Chamber consists of a chert horizon (thin layer of rock which may contain fossils) which is unbroken.”

“Likewise, on the surface, above the cave there is no indication of a direct vertical entrance way into the chamber,” he said.

3. Fossils recovered were placed there over a long period of time

Berger said the Homo naledi fossils were found in different layers of the chamber’s ground floor, suggesting that the fossils entered the cave over a long period of time.

“Therefore we think that they did not die during a single catastrophic event,” he said.

4. There are no other fossils apart from Homo naledi

The Dinaledi cave chamber was so inaccessible for the expedition team that a special team of small cavers, known as “underground astronauts” were recruited to recover the fossils.

They had to be able to climb through an 18-centimetre wide opening and climb down a 12-metre vertical shaft.

PHOTO: Researcher K. Lindsay Eaves in the Rising Star cave in the Cradle of Humankind. Courtesy University of the Witwatersrand.

Berger said the Dinaledi chamber has always been inaccessible.

“To get into the chamber involves a steep climb up a sharp lime stone block called “the Dragon’s Back”, and a drop down a narrow crack. All this has to be done deep inside the cave, in the dark zone in the total absence of light,” he said.

Berger said that the hominins may have used fire to guide their way in the cave chamber.

“Our geological investigation indicates that the Dinaledi Chamber was always in the dark zone, and the route to get there was probably very complex involving navigating difficult terrain,” he said.

5. The unique environment of the Dinaledi chamber

The muddy ground floor of the chamber where fossils of Homo naledi were found is very different to the ground floor of other fossil sites in the Cradle of Humankind like Sterkfontein, Swartkrans or Malapa.

“Instead they are embedded in soft, rubbly deposits that largely consist of mud-clasts (fragmented rocks made up of clay and silt) that have not been fully lithified (converted into rock).”

“This is an unusual geological setting, and is very distinct,” he said.

PHOTO: The hand fossil of the newly discovered hominin species Homo naledi in situ before it was removed from the Rising Star cave. Courtesy: Marina Elliot/University of the Witwatersrand

6. The fossils were never brought to the surface

At other sites in the Cradle of Humankind, fossils were brought to the surface by flowing water or mud.

Berger said at the Rising Star Cave site, “There is no evidence of water or mud flowing into the cave with enough force to transport bones.”

The fact that some parts of the Homo naledi skeletons were found with bones near to each other “in close anatomical association” indicates that bodies entered the chamber whole.

PHOTO: The Rising Star cave. Courtesy: University of the Witwatersrand.

7. There’s no evidence that fossils were taken into the cave by predators

Berger said none of the bones recovered from the cave have bite marks from predators.

“We also have found no fossil remains of any predator species in association with the hominins,” he said.

“It would be unlikely that predator animals would take their prey deep into the cave all the way into the Dinaledi Chamber deep into the dark zone,” said Berger.

The big question for Berger’s team however is how the hominins entered the cave.

“Our investigations show that the bodies came in whole…. So far we have found no evidence on any the bones for any form of trauma as a result of a fall, or due to predators,” said Berger.

“We have also not found any evidence of cannibalism like cut-marks, like on some of the hominin fossil sites in European caves.”

“All this is very hard to explain and suggests that at some point Homo naledi entered the cave on purpose to deposit bodies in the Dinaledi Chamber,” said Berger.

Read more about what makes Homo naledi our human ancestor.