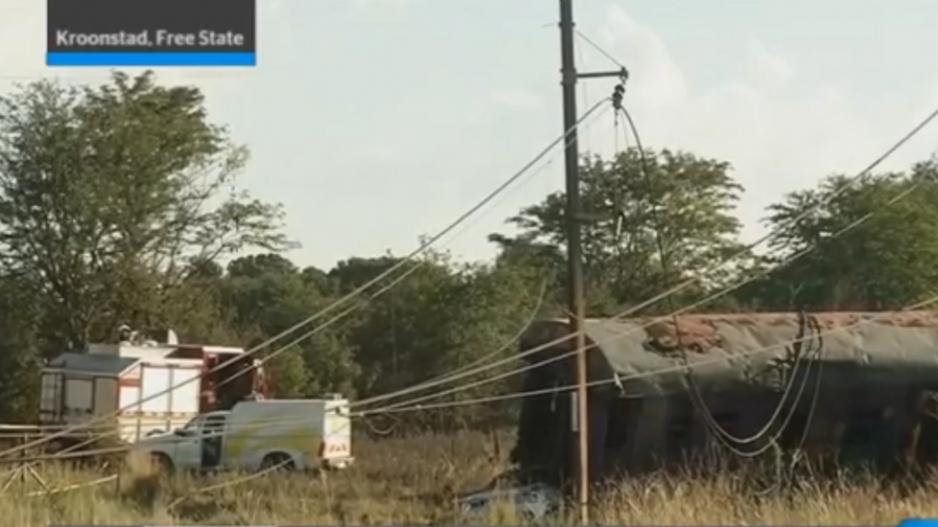 Mortuary vans arrive at the scene where early on Thursday morning a truck skipping a level crossing caused a train accident that killed at least 16 people.

JOHANNESBURG – Eighteen people have been confirmed as having burned to death in a collision involving a train and a truck in Kroonstad in the Free State.

Hundreds of people were injured in the incident which Prasa is describing as a tragic day.

According to the Minister of Transport, Joe Maswanganyi, the truck driver involved in the accident was "taking chances", which has resulted in the loss of lives.

There were 713 passengers on the train when the accident happened. Transport minister Joe Masangwanyi is at the scene TrainCrash pic.twitter.com/7HMwEgfTmn

Passenger Seipati Moletsane said the train was traveling from Port Elizabeth to Johannesburg when the truck could not brake and hit the first and second carriage.

Footage by passengers from the scene shows a number of Shosholoza Meyl carriages engulfed in flames.

Thu, 04 January
09:52 AM
Free State Hennenman / Kroonstad: A train has gone off the rails on the road between Hennenman and Kroonstad. A bit of smoke in that area, please drive cautiously. @_ArriveAlive @HALO_Aviation @fs_health @Netcare911_sa @ER24EMS

Passengers who are able to travel are being transported to Johannesburg by busses.

Families who had loved ones onboard the train travelling from Port Elizabeth to Johannesburg can call the 24 hour line on 011 544 9623. Officials will be able to assist with names and hospital admissions.

We are still at the scene of the TrainCrash, two more bodies were retrieved from the wreckage. Prasa officials on the ground now put the death toll at 16