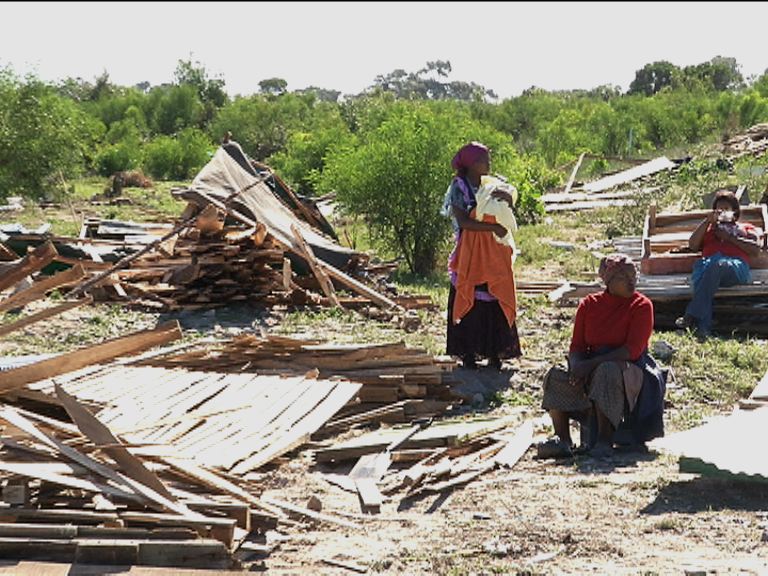 Despite having been evicted several times by law enforcement, shack dwellers in Phillipi in Cape Town continue to re-erect their homes on a strip of land their calling Marikana.

“This is Marikana because we believe people will die here for this land,” says shack dweller Simphiwe Winston, before hurriedly returning to build his home for the third time in just three days.

The race is on for Winston, who, along with about 100 other people, including women and children, are hurriedly trying to rebuild their shacks before law enforcement officers return to once again destroy them.

According to Kylie Hatton of the City of Cape Town the anti-land invasion unit is well within their legal rights to demolish the structures, as long as they are partially built and not yet occupied.

Referring to the Prevention of Illegal Eviction from and Unlawful Occupation of Land Act, Hatton said, “In situations like these, anti land invasion units move in quickly to avoid the need to have to go through a court process as people are illegally trying to occupy city owned land.”

Cindy Ketani  of the Abahlali base Mjondolo shack dwellers movement however questioned the City’s motives, saying that some of the shacks are occupied and law enforcement are only selecting certain shacks to destroy.

“When they come to destroy these shacks the show us no court orders or papers they just pull these people out like dogs,” Ketani said.

“I asked them why they are not destroying the shacks over there and they said they do not need to explain anything to me, it is their job.”

The new residents claim the land, which is made up of rubbish and unkept shrubs, has been unoccupied for years and has only been used for criminal activities like muggings, rapes, abortions and suicides.

Despite its undeveloped state Hatton claims the area has been earmarked for development.

“It’s part of an area that will be developed into mixed youth housing upgrade and community develop upgrade,” he said.