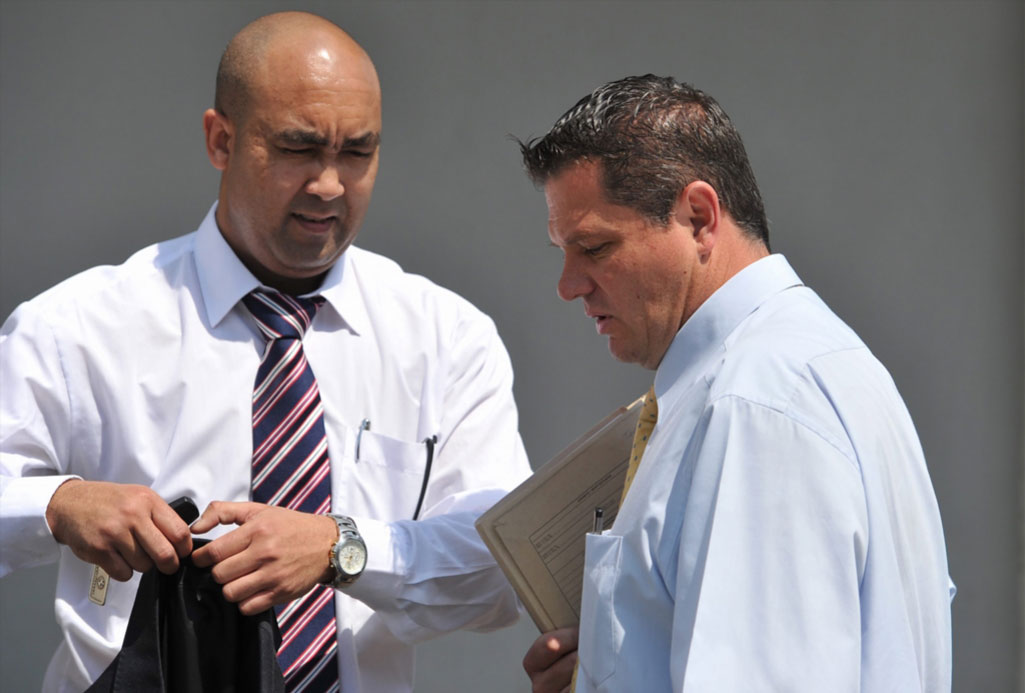 National Prosecuting Authority's (NPA) Shaun Abrahams and General Zeeman, the investigating officer for the case against Henry Okah, outside the Johannesburg Magistrate's court, in South Africa on 4 October 2010.

JOHANNESBURG – President Jacob Zuma has appointed advocate Shaun Abrahams as the National Director of Public Prosecutions (NDPP).
Abrahams, a senior state advocate in the Priority Crimes Litigation Unit in the office of the NDPP, takes over as the head of the country’s prosecuting authority after Mxolisi Nxasana stepped down last month after reaching a settlement agreement with Zuma. Silas Ramaite had been acting as NDPP after Nxasana’s departure.
In a statement released on Thursday morning, Zuma said “Adv Abrahams has 17 years of experience in the prosecution service. During this period, he has accumulated vast experience and has gained impeccable technical expertise. I am confident that he will be able to enhance the efficiency of the National Prosecuting Authority. I wish him well in this critical responsibility."
The terms of the settlement were not disclosed but it ended a 10-month standoff between Zuma and Nxasana. It began in July last year when Zuma announced that he would institute an inquiry into Nxasana’s fitness to hold office after it emerged that he had failed to disclose past brushes with the law, including a murder charge in the 1980s on which he was acquitted. The inquiry was called off hours before it was finally due to start last month.

Just spoke to newly appointed NPA head Shaun Abrahams. he says he is "very grateful for trust placed in me by the President"

New NDPP Shaun Abrahams - who prosecuted Eugene Terreblanche and Mangaung plotters - says he is "looking forward" to his new role.