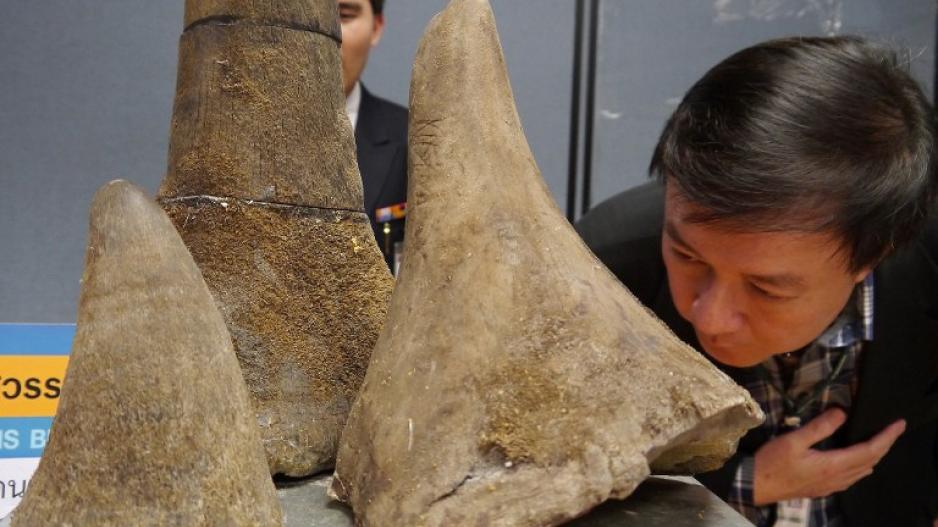 This handout photograph provided by the Freeland Foundation shows Thai customs officers looking at alleged smuggled rhino horn displayed on a table, during a press conference at the International Suvarnabhumi airport in Bangkok on January 7, 2013.

JOHANNESBURG – The trade of rhino horn is in the spotlight at the 17th Conference of Parties to the Convention on International Trade in Endangered Species of Fauna and Flora (Cites COP17) currently under way at the Sandton Convention Centre.

Swaziland has submitted a proposal to the Cites COP17 world wildlife conference that the trade in white rhino horn be legalised.

The proposal states that the parties, “permit a limited and regulated trade in white rhino horn which has been collected in the past from natural deaths, or recovered from poached Swazi rhino, as well as horn to be harvested in a non-lethal way from a limited number of white rhino in the future in Swaziland.”

The controversial proposal from Swaziland to legalize the trade in white rhino horn. CITESCoP17 @eNCA pic.twitter.com/M1TjM0xFZZ

At a media briefing on Saturday after the opening of the conference, Minister of Environmental Affairs Edna Molewa said that more information was required.

“We made a point – and this is still our standing point – that Swaziland will table its proposal for discussion, there is still some information that we’ll require before we are all satisfied that it does meet the scientific requirement and all information gaps that are there needs to be filled,” she said.

The World Wildlife Fund’s manager of the rhino programme Dr Jo Shaw said they would not be supporting the proposal.

“We have huge sympathy for the situation that Swaziland is in we can understand the great challenges they’re having in trying to meet the financial costs of maintaining the security of their rhinos.

“Our concern is that it (the proposal) lacks a lot of detail in the mechanism of how trade could actually be made and who it could be sold to. Without that kind of information I don’t think the parties can come to a good decision (to vote for the proposal),” she said.

eNCA.com wants to know what you think. Vote in the Twitter poll below:

Should South Africa support Swaziland&39;s proposal at CITESCop17 to legalise the trade in white rhino horn?