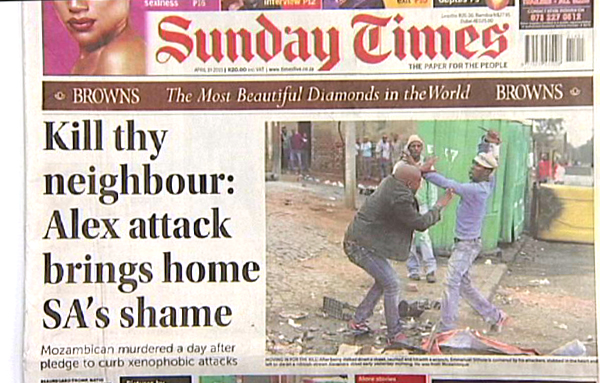 Sunday Times senior photographer James Outway captured the murder of Mozambican Emmanuel Sithole, in Alexander township in Johannesburg. The images were printed on the front page of the newspaper.

The Mozambican was stabbed to death in Alexandra over the weekend.

The attack was captured on camera and has become the face of the latest violence directed at foreigners.

Relatives said the 25-year-old had lived in South Africa since 2006 and considered Alex his second home.

EmmanuelSithole&39;s friend Tiwani Matewu says killers refused to pay for cigarettes,they then pour alcohol on Sithole, then stabbed him.

“When his father died, he took over the responsibility of being a breadwinner at home.

“He was a very good person. He was friendly and got along with everyone.

“I don&39;t know of any trouble he was involved in,” said Jeremy Sithole.

Three people have been arrested in connection with Sithole&39;s death.