Snakes and churches: A deadly combination 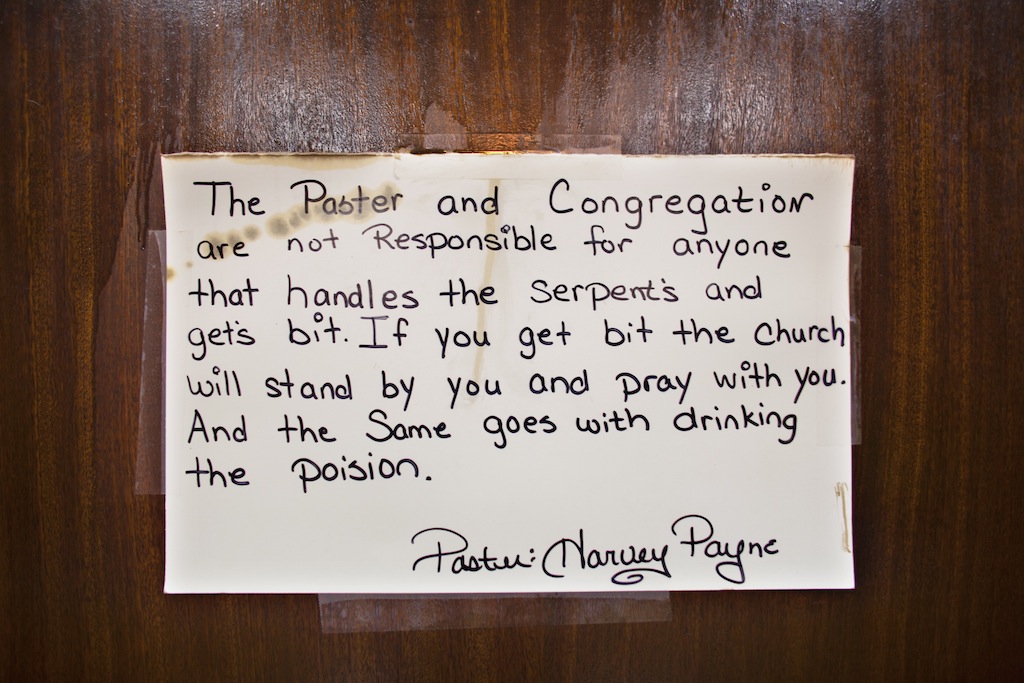 A handwritten sign on the altar of the Church of the Lord Jesus, a Signs Pentecostal denomination unique to Appalachia, warns members of the consequences of picking up snakes before homecoming service at the church in West Virginia, USA in 2010.

Photographs of the End Times Disciples Ministry in Soshanguve made news headlines around the country. The outrage lead to Mnguni being arrested on charges of animal cruelty.

Pictures on the church&39;s Facebook page showed the so-called prophet standing over members of his congregation as they writhe on the ground with their tongues sticking out after he "commanded the spirit of snakes to enter (them)".

The church tent was later torn down and burnt by members of the Economic Freedom Fighters political party.

While this incident astonished South Africans, it’s not the first time snakes have been used in religious rituals around the world.

Religious rituals with snakes can sometimes end in death.

In the USA, the Signs Pentecostal denomination situated in West Virginia became world famous after the National Geographic 2013 series on them called “Snake Salvation”.

A picture dated 03 September 2011 shows Pastor Mack Wolford (C), a member of the &39;Signs&39; Pentecostal denomination, handling a highly venomous timber rattlesnake during an evening service at the Church of the Lord Jesus in Jolo, West Virginia, USA. According to media reports 44-year-old Wolford died after a rattlesnake bit him during an outdoor service near Bluefield, West Virginia, on 27 May 2012. Photo: EPA/Jim lo Scalzo

A visitor to the Church of the Lord Jesus, a Signs Pentecostal denomination unique to Appalachia, prays after being anointed with oil during homecoming service at the church in West Virginia, USA, 05 September 2010. Photo: EPA/Jim lo Scalzo

Snake boxes containing highly venomous timber rattlesnakes and copperheads sit on the altar of the Church of the Lord Jesus, a Signs Pentecostal denomination unique to Appalachia, before homecoming service at the church in West Virginia, USA, 04 September 2010. Photo: EPA/Jim lo Scalzo

Members and visitors to the Church of the Lord Jesus, a Signs Pentecostal denomination unique to Appalachia, pass around a timber rattlesnake during homecoming service at the church in West Virginia, USA, 04 September 2010. Photo: EPA/Jim lo Scalzo

Watch a video of one of the episodes of Snake Salvation on National Geographic:

In India and Nepal, the Nag panchami festival is an annual Hindu event which is celebrated to worship snakes by offering them milk during the event. It’s usually celebrated sometime in July or August.

Nine-year-old boy, Prakash waits for treatment by a healer after he was bitten by a snake in Shibpur, India where villagers worship the God of Snakes, Monday 02 May 2005. More than 100 villagers die of snake bites every year, authorities said. The village is far from government-run hospitals and rural doctors are unable to treat snake bites because of the lack of anti-venom serum. EPA/Piyal Adhikary

Indian women devotees pray to a king cobra snake on the eve of the Nagpanchami festival in Bhopal, India, 31 July 2014. EPA/Sanjeev Gupta

A devotee offers milk to a king cobra snake on the eve of the Nagpanchami festival in Bhopal, India, 31 July 2014. EPA/Sanjeev Gupta

An Indian family perform prayer during a sacrifice festival at Hiragunge village, 62km west of Calcutta, India, 25 March 2012. Devotees visited a temple of Snake Goddess Manasa with their ducks for sacrifice during worship. Ducks are sacrificed for spiritual reasons as part of this religious ritual in India. EPA/Piyal Adhikary

* Watch eNCA&39;s special feature Charismatic Africa below. eNCA reporter Thulasizwe Simelane takes a close look at politics, economics and faith, and how they are shaping religion in the country.