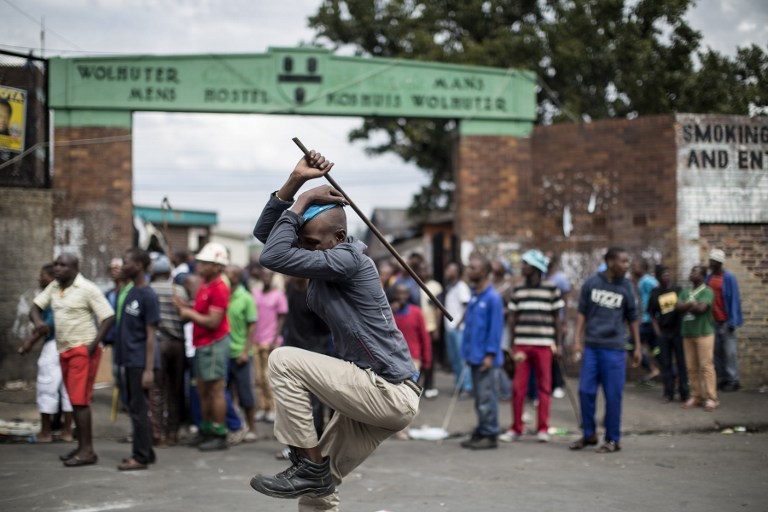 A Zulu protester with a stick demonstrates against foreign migrants outside their hostel in Jeppestown.

JOHANNESBURG - Countries neighbouring South Africa on Friday prepared to evacuate their citizens from South Africa as the UN raised the alarm over deadly xenophobic attacks which have displaced thousands.

The anti-foreigner violence, which erupted in Durban, has left at least six people dead and spread to Johannesburg.

Foreigners who have fled their homes are sheltering in makeshift camps.

Zimbabwe&39;s ambassador to South Africa, Isaac Moyo said the repatriation of about 1,000 Zimbabweans from Durban would start on Sunday.

In the Zimbabwean capital Harare, demonstrators marched to the South African embassy to condemn what they called the "senseless and gruesome slaughter" of fellow Africans.

In Mozambique, a group of about 200 on Friday blockaded the southern Lebombo border with South Africa, stoning South African vehicles.

In Zambia, a privately-owned radio station has stopped playing South African music in protest against the xenophobic attacks.

"Radio QFM has blacked out the playing of South African music effective today, April 17th in protest against xenophobic attacks on foreign nationals taking place in that country," QFM managing director Asan Nyama said in a statement posted on the station&39;s website.

South African singer Kelly Khumalo was forced to postpone performances in London because of outrage, while Big Nuz -- a group that plays the popular Kwaito dance music genre -- had to cancel a concert in Zimbabwe, Minister in the Presidency Jeff Radebe said Friday.

The anger in neighbouring countries was exacerbated by the fact that they hosted thousands of South African exiles during the struggle against apartheid -- a point that President Jacob Zuma raised in a speech to parliament Thursday.

"We were treated with generosity, dignity and respect by our brothers and sisters on the rest of the continent," Zuma said, noting that their solidarity was "critical to achievement of freedom and democracy we are enjoying today".

* Protesters gathered outside the South African embassy in London over the continued xenophobic attacks. Watch the video in the gallery above.