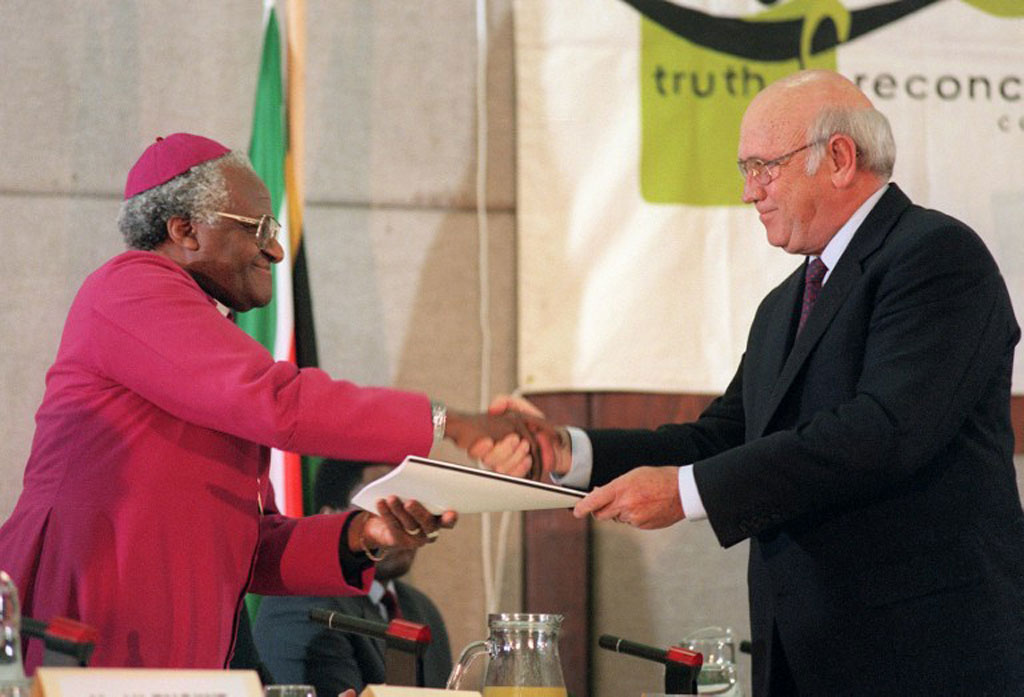 F. W. de Klerk (R), leader of the National Party, hands overs the party's submission to Archbishop Desmond Tutu, head of the Truth and Reconciliation Commission (TRC) during the NP's submission before the TRC on 21 August, 1996 in Cape Town.

Debate still rages on whether the post-apartheid leadership chose reconciliation over justice.

Marjorie Jobson, director of the Khulumani support group, says she hopes that on the anniversary Janusz Walus, who murdered Chris Hani, will disclose the full truth of what happened.

“The process is actually quite simple and it means that Mr Walus, who has been approached by one of the daughters of Chris Hani, would need actually to be prepared to tell everything that he knows that was behind the targeting of their father. They have a right to that knowledge. That is the right to restore their dignity. I can fully understand the growing anger that they feel being denied that truth and so it is entirely in Mr Walus&39;s hands what he chooses to do,” she said.

Who are we? Khulumani Support Group was started by survivors testifying at the Truth and Reconciliation... https://t.co/eWebKMt8yM

Khulumani calls for government to recognise victims of gender violence

Rape survivors in the Phola Park informal settlement on Johannesburg’s East Rand claim they were never given the chance to testify before the TRC.

The 32 Battalion raided the settlement in 1992, leaving one woman dead and more than 100 people injured, ith dozens of woman claiming they had been raped by soldiers.

The South African Defence Force claimed the raid was in response to an unprovoked gun attack.

Those who witnessed it, tell a different story.

“32 Battalion raped the women and the children, without exception. They even raped the grannies. At that time, I was younger. They would go on and on just raping you. I would probably have died, if the men had not come back,” said rape survivor, Nowezile Spili.

The group is fighting for the government to recognise victims of apartheid violence, especially those excluded from TRC processes.

The TRC did not have a category for gender violence.