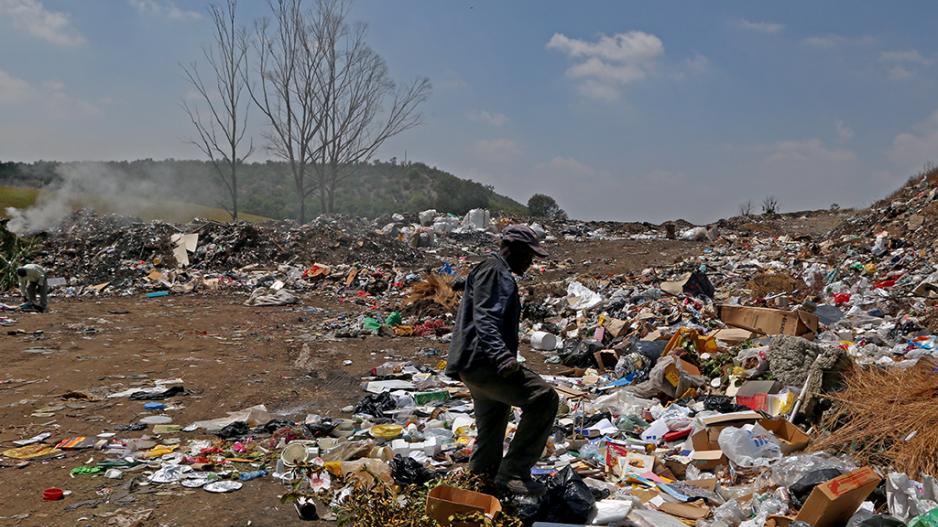 There are more than 150 waste pickers who sort through rubbish at this Sasolburg landfill, October 2013.

JOHANNESBURG - As World Environment Day is marked around the globe South Africa&39;s landfill space is fast running out.

A report by the Department of Environmental Affairs states that in 2011 South Africans generated more than 108 million tonnes of waste per year - that&39;s 5kg of waste per person per day - and only 10% of this gets recycled.

Dr Suzan Oelofse at the Council for Scientific and Industrial Research (CSIR) says the situation is hugely problematic because South Africa is rapidly running out of landfill airspace.

“We cannot continue with business as usual.  The only alternative is to minimize through reuse and recycling,” she said.

According to the National Waste Information Baseline Report, of the total 108 million tonnes, 90% goes to landfills.

The fact that we have so much waste is a symptom of a bigger problem explained Oelofse, a senior scientist specialising in waste governance at the CSIR,.

“Waste is a symptom of inefficient use of resources. If we can rule out inefficiencies in all production and supply systems by investing in circular economies, there will be very little waste to deal with,” she said.

Musa Chamane, waste campaign manager at groundWorkSA agreed that there will not be a decrease in waste generation until recycling is prioritized.

Chamane explained: “The Waste Act 2008 calls on the government to implement waste minimization, reducing, re-use and recycling, strategies which are not being prioritized at most local and district municipal levels, therefore we will continue to see an increase in waste

South Africa has a comprehensive waste management strategy released in 2011 by the Department of Environmental Affairs.

The number one goal of the strategy is to promote waste minimization, re-use, recycling and recovery of waste. The ambitious target of having 25% of recyclables diverted from landfill sites for re-use, recycling or recovery by 2016 has also been set.

Oelofse said this target along with others in the strategy is unrealistic and not strategic in nature, “In my view the biggest gap in the strategy is the lack of a well defined action plan, with clear short, medium and long terms goals towards achieving strategic targets.”

More than 60,000 unemployed people in South Africa make a living from recycling. These people, known as waste pickers, spend their days on landfills sorting through rubbish collecting glass and plastic bottles and can earn a minimum of R120 a day doing this.

Waste pickers have for the last few years battling for more formal inclusion in the recycling economy.

Spokesperson for the Department of Environmental Affairs Albi Modise said while there is no reference to waste pickers in the National Waste Management Strategy, their role and contribution is acknowledged.

“The Department is currently undertaking a study to determine how the contribution and role of waste pickers can be accounted for in the formal waste management system," Modise said.

As more landfills reach their lifespan, landowners are investigating potential waste to energy projects to continue run a profitable business. The South African Waste Pickers’ Association (SAWPA) has held protests against one of these projects proposed by Enviroserv for their

Enviroserv wants to continue offering a service in the area and propose that their incinerator will be able to convert 2,000 tons of waste a day into 35 megawatts of power that will supply the national grid.

The Department of Environmental Affairs has not finalized the outcome of Enviroserv’s application for environmental authorization.

“The Final Scoping Report was accepted by the Department on 28 May 2014 and we await the submission of the draft and final Environmental Impact Assessment Report respectively, before a decision on the application can be made,” Modise told eNCA.com.

If this project goes ahead it may take away the income of many waste pickers and it could pave the way for more projects like this.

Chamane said SAWPA has only be supported by local and district municipalities on five recycling pilot projects at landfills around the country, despite there being over hundreds of landfills and waste dumps in South Africa.

“If government structures were more supportive of waste pickers becoming formal cooperatives and small recycling initiatives, this would lead to their fulfillment of their promise to create employment for at least some of the thousands of people living in poverty,” said Chamane.