South African air quality at risk if Eskom gets its way 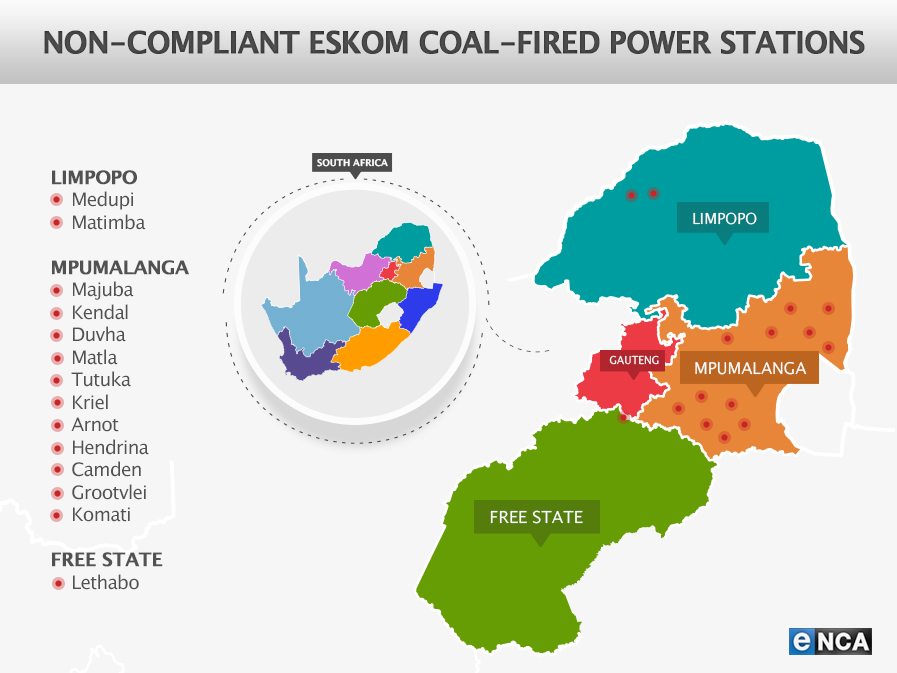 Eskom is planning to submit applications to the department of environmental affairs to postpone the deadline for which they need to comply with minimum emission standards in the Naitonal Environmental Management Air Quality Act of 2004.

The Centre for Environmental Rights has drafted a legal objection to Eskom’s request on behalf of a number of environmental groups.

The legal objections are on the grounds that Eskom does not meet the requirements for a postponement as set out in air quality act, the 2012 National Framework for Air Quality Management in the Republic of South Africa (Framework), and the Atmospheric Impact Report Regulations.

Another legal objection argues that granting Eskom the applications will permit increased pollution in declared Priority Areas, which is contrary to the aim of the declaration of such areas.

Eskom wants postponements for operations at 14 of their power stations around the country. Today is the final day the public can submit comments on the power giant’s application for non-compliance with coal-fired stations.

The Department of Environmental Affairs is expecting Eskom and other groups like Sasol and Natref to meet existing plant standards by April 1, 2015 and stricter standards for new plants by April 1, 2020.

“Eskom’s application for rolling postponement (and effectively exemption) from compliance with the requirements of these air pollution standards will ultimately result in much higher air pollution emissions for decades to come,” Euripodou said.

South Africans may die prematurely and have their health impaired by exposure to excess emissions of particulate matter, sulphur dioxide, nitrogen oxides and mercury.

“These impacts will cost the South African taxpayer hundreds of billions more than compliance will cost Eskom,” he said.

But the department of environmental affairs says they need to evaluate each application individually.

Spokesperson Albi Modise says that only after considering detailed atmospheric impact reports for each of the power stations.

“Such atmospheric impact report will contain scientific information to understand current and projected impacts of each facility so as to avoid long-term negative health impacts.”

The 14 coal-fired power stations fall within air pollution priority areas noted as so by the Department of Environmental Affairs because of existing pollution.

In a statement supplied to eNCA.com Eskom has stated its commitment to working with government to find a solution to the issue of non-compliance in the face of meeting the demand for electricity for 52-million South Africans.

They have noted that they are working to reduce emissions at all plants but need special relief from Kriel power station because the standards are too stringent.

“Eskom prioritises compliance and transparency and has a responsibility to power the country and the national grid cannot afford to lose the electricity generated by Kriel.”

They further add that they are committed to safe-guarding the environment but the performance and compliance of several coal-fired power stations has been compromised by standards in the National Environmental Management: Air Quality Act 2004.

Most of the stations Eskom has included in their bid are within the Highveld Priority Area in Mpumalanga.

In their background information document, Eskom have highlighted that it may make more of a difference to improve the air quality in the area by providing households with free electricity and stoves as burning coal is more harmful to human health than the emissions coming from their power plants which are not at ground level.

Environmentalists say this air quality off-setting is not the answer to the problem.

“Like most other forms of environmental off-setting, air quality off-setting is nothing more than a permission slip for dirty industry to continue doing more of the same,” said Dominque Doyle, Energy Policy Officer at Earthlife Africa Johannesburg.

She adds that poor air quality is caused by burning coal for electricity which is demanded from other parts of the country and there are limited means by which poor ambient air quality caused by coal-fired power stations can be offset.

But Modise says that off-setting may be an option.

“Air quality problems in South Africa are not limited to industrial emissions,” he said.

“Off-setting as a concept presents an opportunity to resolve some of the critical air pollution problems that cannot be easily regulated, for example, domestic coal combustion,” said Modise.

According to groundWork SA granting Eskom postponement on air pollution standards would result in: