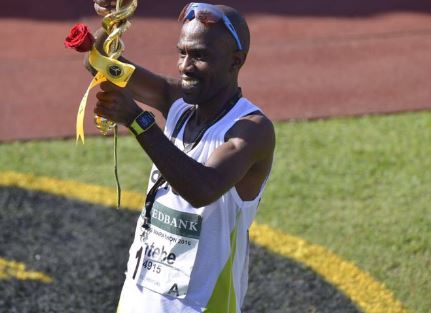 David Gatebe is the new holder of the Comrades Marathon "down" run record.

"I had a two minute lead and when I started to smell the ocean in Durban I knew I would do it," Gatebe, 2016 Comrades winner. @eNCA

Congratulations to our own David Gatebe who broke the Comrades record! 05:18:12 Comrades2016  winner pic.twitter.com/OV9ysLCvbZ

Russian Leonid Shvetsov in 2007 set the ‘down’ run record of 5:20:49, and the previously unheralded Gatebe in Comrades circles, put in a truly historic performance to shatter that mark by over 2 minutes.

In second place, fellow South African and 2012 Comrades champion was Ludwick Mamabolo who crossed the line in 5:24:05. Taking third was another SA runner Bongmusa Mthembu in 5:26:39.

Gatebe, the 2013 Two Oceans champion, had not made it into the top 20 in his three previous attempts. Gatebe, however, does have a 2:14 marathon time behind his name and showed off his speed in the latter stages of the race to power to victory.

The 34-year-old worked his way up from 54th position after 16.5km, moving into the top 10 at the halfway stage. But in the final 44km, Gatebe was unmatched in the way he powered ahead to claim a memorable breakthrough win.

As he crossed the line, Gatebe even managed to do push-ups for the appreciative crowd.

“I’m feeling so good and happy I broke the record,” said Gatebe afterwards.

“I told myself, not to worry about anyone and just ran on my own near the end.” - Additional reporting ANA

* Watch the full video report by eNCA&39;s Myron Naicker in the gallery above.

David Gatebe is the new holder of the Comrades Marathon down run record. What a run from the South African. @eNCA pic.twitter.com/LwLPYYT4Nu

David Gatebe of South Africa wins his maiden Comrades Marathon title in a &39;down&39; run record of 5:18:19 Comrades2016 pic.twitter.com/BBVMOHWhjv

Mamabolo looking fresh and elated at the finish after his awesome 5:24:05 run Comrades2016 pic.twitter.com/Nz1wH2O2Pt

Records are made to be broken. The amazing David Gatebe pic.twitter.com/K7vpAdfwKl