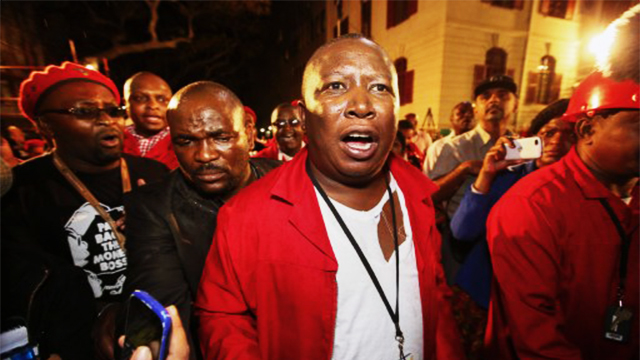 Economic Freedom Fighters leader Julius Malema (C) leaves the parliament after being evicted during the formal opening of parliament and the President's State of the Nation address in Cape Town on February 12, 2015.

JOHANNESBURG - Spy claims against Thuli Madonsela, Julius Malema, Lindiwe Mazibuko, and Joseph Mathunjwa were dismissed as rubbish, according to their comments published by Beeld on Friday.

"A grade nine pupil could see it is rubbish," said Public Protector Thuli Madonsela, after the State Security Agency (SSA) issued a statement on Thursday saying it was probing spying claims against the four.

SSA spokesman Brian Dube said allegations against them led the agency to africainteligenceleaks.wordpress.com, and other social media platforms.

Madonsela said she would lodge a formal complaint against the SSA and ask it to withdraw the statement.

She said it was "interesting" that it surfaced days before President Jacob Zuma answered questions in Parliament.

Economic Freedom Fighters leader Julius Malema said: "I have never heard such madness in my life... Those people are clowns. Our biggest problem is that our &39;intelligence&39; is not intelligent."

Mathunjwa, president of the Association of Mineworkers and Construction Union (Amcu), said it was "rubbish" and a "waste of state resources" to investigate such allegations.

Mazibuko, former Democratic Alliance parliamentary leader who is studying at Harvard, tweeted: "It&39;s pretty embarrassing that a SA cabinet minister would issue a press statement responding to a false blog post from the lunatic fringe" followed by a "sad face" emoticon.

Claims include that the CIA in Langley, US, has a file on Mazibuko saying she is trying to organise a "Pretoria version of the Arab spring".