SRC leaders walk out of meeting with Nzimande 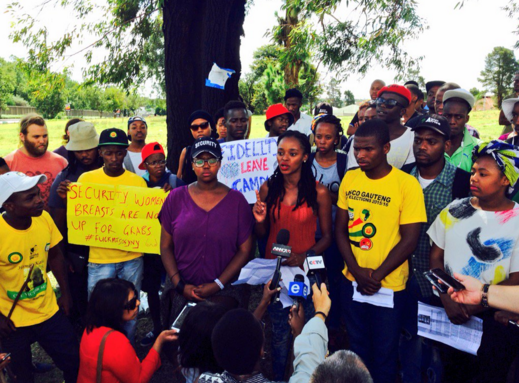 Leaders of the FeesMustFall movement speaking to the media in Auckland Park on Wednesday 13 January 2016.

JOHANNESBURG – Student Representative Council (SRC) leaders from the country’s institutions of higher learning walked out of a meeting with Higher Education Minister Blade Nzimande on Thursday and vowed to intensify the “Fees Must Fall” movement.

The meeting, held in Kempton Park, Johannesburg, was meant to resolve the ongoing protests by students demanding free higher education.

University of Fort Hare SRC president Busisiwe Mashiqa said Nzimande and his team would not commit to their demands, but instead lobbied them to not continue to protest action.

“We were asking for a clear commitment from them, and with time frames so that we can all go back to our campuses and tell students whether government would intervene and if so, when.

“They are not doing that…they’re not giving us a chance to speak, and they’re dictating. They are just here to lobby us not to strike, of which that is not what we want as well because we want to study,” she told reporters after the walk-out from the meeting.

A handful of other student representative decided to stay behind in the meeting.

Witwatersrand University SRC president Nompendulo Mkhatshwa said the meeting turned into one of the many follow-up meetings held previously.

“It is a talk shop, and we are tired of that. These are follow up meetings we keep on sitting in…do they want us to shut down the whole country in order for our demands to be heard again?” she asked.

The student leaders said they would go back to the drawing board to determine the way forward.

Nzimande held his own impromptu press briefing at the venue. The meeting had proceeded well until the walkout, he said.

He added that he welcomed the announcement of a presidential commission of inquiry, led by retired Judge Jonathan Arthur Heher, a former judge of the Supreme Court of Appeal, to look into the question of funding for higher education.

He said a structure, comprising of officials from his department, students and vice chancellors would also be formed to address the students’ demand.

“There were eight demands on the table, and we were having good discussions. We encourage those who left the meeting to come back to the table,” Nzimande said.

Meanwhile, the Progressive Youth Alliance (PYA), consisting of ANC-aligned SA Students Council (Sasco) and the Young Communist League of SA (YCL) and the ANC Youth League, slammed the continuing student protests at a briefing at the ANC’s Luthuli House headquaters.

“As the PYA, we call upon students from all walks of life to use the systems provided by government and not to delay their future any longer unnecessarily. There is no reason for strikes to continue when the people’s government has addressed all relevant immediate concerns of students, within the prevailing fiscal constraints.”