State of Capture Report: Who did what? 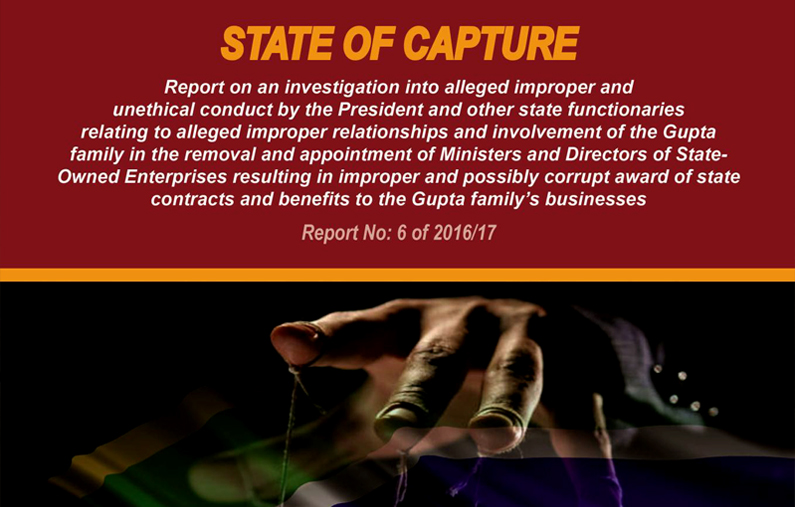 PRETORIA –The public protector’s report State of Capture, about allegations that the Gupta family wielded influence over President Jacob Zuma in the appointment of cabinet ministers, makes a number of observations based on the evidence uncovered.

Below is a list of observations made by the public protector:

1. If the president allowed members of the Gupta family and his son Duduzane to be involved in the removal and appointment of the minister of finance in December 2015:
- It’s worrying that the Gupta family may have been aware of the finance minister reshuffle.
- Equally worrying that Minister Des van Rooyen can be placed in the Saxonwold area [where the Guptas live] on at least seven occasions, including on the day before he was announced as finance minister.

The report states “if the Gupta family knew about the intended appointment it would appear that information was shared then in violation of section 2.3(e) of the Executive Ethics Code”.

2. If the president allowed the Guptas and his son to be involved in the removal and appointment of members of cabinet:
- There seems to be no evidence taken by anyone to verify [former MP] Vytjie Mentor’s allegations that the Gupta family offered her the position of public enterprises minister.
- If this is true then the following acts may have been infringed on: the Executive Ethics Code, the constitution with regard to provision of Section 2.3 (c),  provisions of Section 34 of the Prevention and Combatting of Corrupt Activities act, 12 of 2004.

3. If the president allowed the Gupta family and his son to be involved in appointing board members of state-owned enterprises.

While not relevant to the alleged influence of the Gupta family, the allegations made by former minister Barbara Hogan deserve a closer look to the extent that they suggest executive and party interference in the management of state-owned enterprises and appointments.

4. If the president turned a blind eye to alleged corrupt linking of appointments to favours by the Guotas and his son.
- No evidence that [Deputy Finance Minister Mcebisi] Jonas’s allegations that he was offered money and a ministerial post in exchange for favours were ever investigated by the executive.

If this is true then the provision of section 2.3© of the Executive Ethics Code may have been infringed.

5. If the president and other cabinet members improperly interfered in the relationship between banks and Gupta-owned companies thus giving preferential treatment to the Gupta companies.
- The unprecedented step taken by cabinet to intervene in a dispute between a private company owned by the president’s friends and his son needs to be looked at in relation to a possible conflict of interest between the president as head of state and his private interest as a friend and father as envisaged under section 2.3(c) of the Executive Ethics Code, which regulates conflict of interest, and section 195 of the constitution, which requires a high level of professional ethics.

6. If the president exposed himself to any risk of conflict between his official duties and his private interest to enrich himself and businesses owned by the Gupta family and his son to be given preferential treatment in the award of state contracts, business financing and trading licences.
- Allegations raised by Jonas and (former government spokesman Themba) Maseko are relevant in this issue. Jonas would be publicly humiliated as a liar and the people of South Africa would lose faith in a democratic government if the president’s denials are proven to be false.

7. If any organ of state acted improperly or corruptly with the appointment of ministers and boards of directors of state-owned enterprises.
- The board of Eskom was improperly appointed and not in line with the spirit of good corporate governance.
- There should have been a mechanism in place to deal with conflicts of interest as they arose.
- A board appointed to a state-owned enterprise should act in the best interests of South Africa and it appears they may have failed to do so.
- No action was taken by the Minister of Public Enterprises to prevent apparent conflicts.

8. If an organ of state acted improperly or corruptly in the award of state contracts to Gupta-linked companies.
- Minister of Mineral Resources Mosebenzi Zwane’s conduct with regards to his involvement in going to Switzerland with officials from the Gupta-owned Tegeta Resources to acquire Optimum Coal Holdings may not be in line with the Public Finance Management Act, 1999, section 96(2) of the Constitution and section 2 of the Executive Ethics Act.
- The sole purpose of awarding contracts to Tegeta to supply Arnot Power Station was made solely for the purposes of funding Tegeta and enabling Tegeta to purchase all shares in Optimum Coal Holdings – the only entity to benefit from Eskom’s decision was Tegeta.
- Eskom didn’t exercise duty of care and this may be a violation of section 50 of the Public Finance Management Act, 1999 (PFMA).
- Eskom awarding of the initial contracts to Tegeta to supply coal to the Majuba power station will be part of the next phase of the investigation.

9. If any organ of state acted corruptly in the extension of state-provided business-financing facilities to Gupta-linked companies or persons
- Regarding the prepayment to Tegeta of R659-million may not be in line with the PFMA and the lack of duty of care of the Eskom board may be in violation of section 50 of the PFMA.
- The manner in which the mining rehabilitation funds behing handled by the Bank of Baroda are in contravention of section 24P of the National Environmental Management Act (NEMA).
- By not treating the rehabilitation funds in the prescribed manner and purpose Tegeta may be in contravention of section 37A of the Income Tax Act.

10. If any person or entity was prejudiced due to the conduct of the state-owned enterprise.
- Eskom may have caused prejudice to Glencore in terms of Eskom’s refusing to sing a new agreement with them to supply coal to Hendrina power station as this wasn’t in line with previous discussions between the two.
- The conduct of Eskom was solely to the benefit of the Gupta-owened Tegeta, in that Eskom forced the sale of Optimum Coal Holdings to Tegeta. This may be a contravention of section 50(2) of the PFMA in that they acted solely for the benefit of one company.

The public protector's remedial action orders that a commission of inquiry headed by a judge solely selected by the chief justice be established to investigate the claims fully. The inquiry must be funded adequately by National Treasury. The commission must complete its task and present the report with findings and recommendations to the president within 180 days.