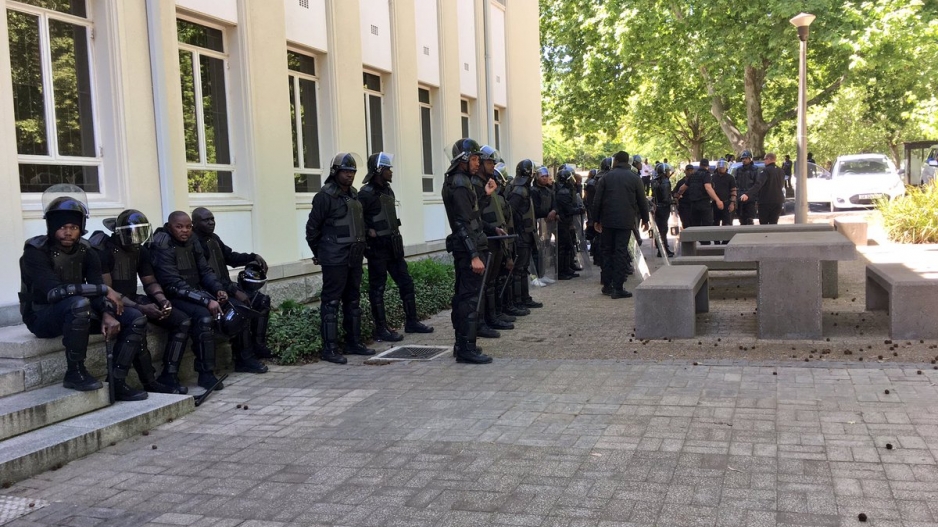 Private security monitored students who tried to mobilise a shutdown of academic activities on campus.

STELLENBOSCH - Student protesters have clashed with police and private security at Stellenbosch University after students attempted to gain access to a closed building on campus.

Some classes were disrupted early on Monday; university administration said that private security were monitoring the situation and that academic activity would continue as far as possible.

READ: Why student protests in South Africa have turned violent

A group of about 160 protesters were reportedly travelling around campus attempting to mobilise and disrupt classes. All buildings were closed and access controlled following the distruptions.

Some classes have been disrupted at Stellenbosch, fire extinguishers used in some instances, updates on uni website #FeesMustFall #eNCA pic.twitter.com/T9PGhj8NtY

Students are joined by workers in their protest action today. A lot more not in class, just watching #Stellies #FeesMustFall #eNCA pic.twitter.com/iHtV4zPJ53

A group of protesters, attempting to gain entry into one of the closed buildings was pepper-sprayed by private security and stun grenades were let off into the crowd.

Some protesters were taken into the building and detained there while students attempted to negotiate with police for their release.

Meanwhile, twelve suspended students at the university have embarked on a hunger strike -- they want their suspensions lifted.

The students have been banned from attending lectures and writing tests, pending the outcome of a disciplinary hearing.

Saw three students being dragged into this building a few moments ago, seems they are being detained inside #Stellies #FeesMustFall #eNCA pic.twitter.com/e3UhxKDa1h

The students state they are looking for an open, honest engagement about fees as well as free, decolonised education.