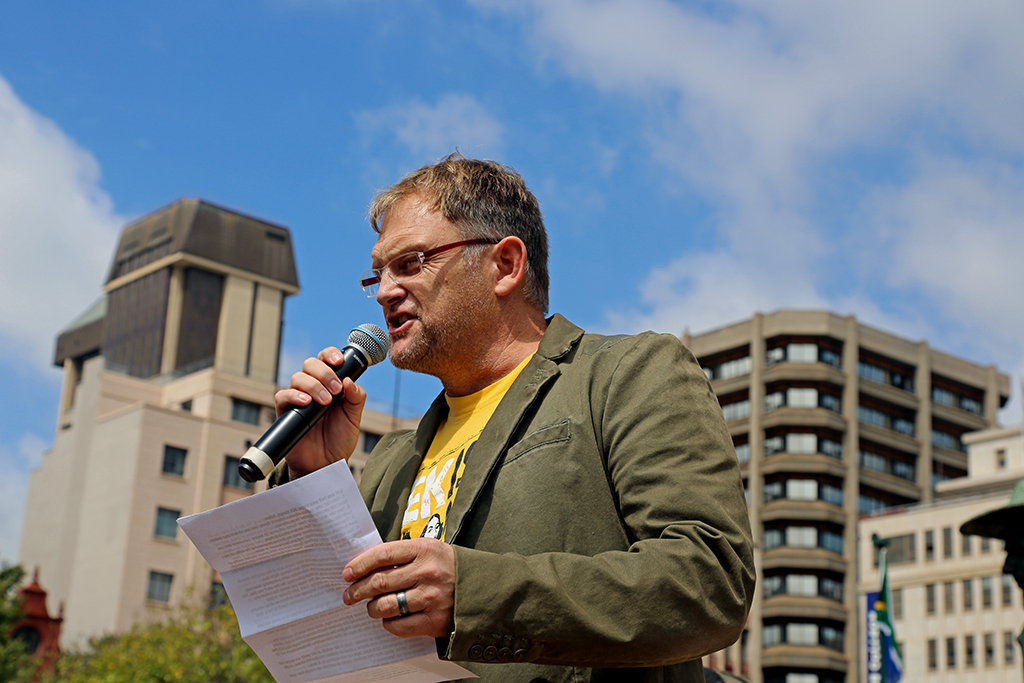 Steve Hofmeyr addresses a crowd in front of the Paul Kruger statue in Pretoria on 8 April 2015.

PRETORIA – Afrikaans musician Steve Hofmeyr participated in a memorial on Wednesday, for the victims of an Umkhonto we Sizwe (MK) bombing in Pretoria more than thirty years ago.

Front Nasionaal -- a right wing political party that supports secession, or breaking away from the Republic of South Africa -- organised the memorial and published images from the blast on social media.

It also lambasted one of the MK operatives involved in the attack, who declined an invitation to attend the event.

On the afternoon of May 20, 1983, a car loaded with 40 kilograms of explosives detonated outside the offices of the South African Air Force (SAAF) headquarters.

Nineteen people died and hundreds more were injured in the blast on Church Street, Pretoria. According to newspaper reports after the bombing, the scene was a "sea of blue" -- reference to the blue uniforms of SAAF members.

Among the 19 dead were the two MK members who had planted the bomb, and 11 SAAF staff. The SAAF figure was later revised down to seven. The rest of the fatalities were civilians.

Testimony heard during the Truth and Reconciliation Commission (TRC) confirmed the bombing was part of an African National Congress (ANC) campaign against the apartheid government.

The two MK members who died in the 1983 attack were Freddie Shangwe and Ezekial Maseko. They died in the car, when the explosives detonated minutes earlier than planned.

Aboobaker Ismail, who was then commander of the ANC’s Special Operations Unit, admitted to planning and orchestrating the Pretoria bombing during a TRC hearing on May 6, 1998.

As the South African Press Association (Sapa) had reported, Ismail said the attack was directed at a military target.

"We did not target civilians," testified Ismail. "However, the policy of the ANC at the time was [such] that we could not wait for the sake of saving a few lives, be prevented from striking at the power of the State, the apartheid state."

However, those at the Front Nasionaal gathering in Pretoria on Wednesday disagreed. Information manager Daniel Ltter wrote, "The fact that the bomb was set of during peak hours in the centre of the city leaves no doubt that the ANC was not at all concerned about the safety of civilians."

During an interview on Koepel Stereo at midday, Hofmeyr slammed the ANC and complained about "terror" in contemporary South Africa.

He complained that there was "not even a statue, not even a little brass plaque” at the site of the bombing.

"I think something must be done about that."

He also painted the ANC as the “most terrorist organization in the world” and said Front Nasionaal had invited Ismail to attend Wednesday&39;s proceedings.

The memorial programme included performances by Hofmeyr and Sunette Bridges, who participated in a demonstration in front of a statue of Paul Kruger last month.

Its morning gathering included a minute of silence for the bombing&39;s victims and concluded with a rendition of Die Stem, which was the National Anthem during apartheid, under the National Party government. "The programme looks as follows," read Ltter&39;s post.

Front Nasionaal was also involved in an attempt to secure parole for one of the men who conspired to kill Chris Hani. Clive Derby-Lewis was denied medical parole in January.