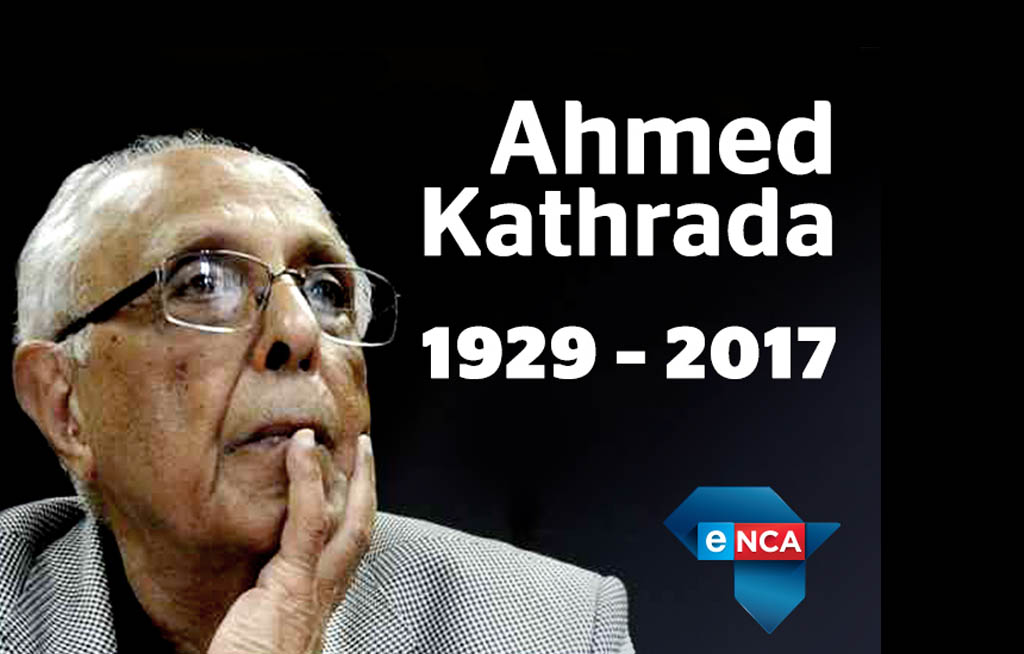 Ahmed Kathrada died on Tuesday after a brief illness.

JOHANNESBURG - Ahmed Kathrada, whose life was dedicated to the struggle for freedom of the black masses in South Africa, died on Tuesday after a brief illness.

Kathrada had remained politically active until his dying days, criticising the recent direction of his beloved African National Congress, to whom he had devoted most of his life, and even calling on  President Jacob Zuma to step down.

The Ahmed Kathrada Foundation, which he founded, continues to work towards promoting ‘the values, rights and principles enshrined in the Freedom Charter and the Constitution of the Republic of South Africa’.

Kathrada is survived by his life partner, Barbara Hogan.

‘Whenever I hear a man express hatred for any race, I wonder just what it is in themselves they hate so much. You can always be sure of this: You cannot express hatred for anything or anybody unless you make use of the supply of hatred within yourself. The only hatred you can express is your own personal possession. To hate is to be enslaved by evil’  – Thomas Dreier as quoted in Ahmed Kathrada’s autobiography, ‘Memoirs’.

Ahmed Kathrada was born on 21 August 1929 in Schweizer-Reneke to parents from Lachpur, India.

When he was nine years old,  his father, a shopkeeper, sent Ahmed to family in Fordsburg in order to further his schooling.

It was during this time that he encountered political activist Yusuf Dadoo. It was to the ‘Dadoo Factor’ that Kathrada ascribed the awakening of his political consciousness in his autobiography, ‘Memoirs’.

Dadoo’s passive resistance campaign to the Asiatic Land Tenure and Trading Act of 1939, which further restricted the trading rights of Indians was to prove to be the first step on Kathrada’s lifelong road of activism.

At the age of 12, Kathrada joined the Young Communist League, primarily because it was ‘part of the broad struggle against injustice and inequality, and for democracy and non-racialism’. During this period, he encountered two of his primary  political influences,  Ismael Meer and Yusuf Cachalia, and first met Nelson Mandela.

The 1946 campaign saw Kathrada working on the publication The Passive Resister and chairing the Transvaal Indian Youth Congress. In December of that year, he was arrested for the first time, in Durban, while protesting against the land tenure act. These protests were later seen as instrumental in the ANC’s decision in 1949 to engage in a civil disobedience campaign.

In 1947, Kathrada moved into Kholvad House in Market Street, where he would reside until his detention in 1963. 1947 also saw the signing of a co-operation pact between the Indian Congress and the ANC, which would presage a shift - especially after the National Party’s 1948 election victory, the passing of the Group Area’s Act, the election of Walter Sisulu, Nelson Mandela and Oliver Tambo to the ANC’s Youth League and the ANC’s adoption of the Programme of Action against unjust laws  - in Kathrada’s political focus.

The 1950 May 1 Freedom Day labour strike - which followed Dr HF Verwoerd’s ascension to the leadership of the National Party and was organised under the banner, Defend Free Speech, to protest the banning of political leaders and the passage of the Suppression of Communism Act - spurred one of the rare conflicts Kathrada would have with Mandela.

The ANC Youth League opposed cooperation with other organisations, notably the Communist Party, also fearing the strike would detract from their Programme of Action, and disrupted an organising meeting. Kathrada called out Mandela on the action and was strongly rebuked. But Kathrada noted that years later in prison, Madiba was gracious enough to admit that he was wrong in opposing the strike.

Kathrada’s political involvement saw him arrested numerous times in the 50’s decade; during the Defiance Campaign of 1952 under the Suppression of Communism Act; in 1953 and 1954 while opposing forced removals in Sophiatown; and in December 1956 alongside 155 others on charges of treason.

The treason trial was to occupy the political landscape from 1956-1961 and although all defendants were found not guilty, the Sharpeville massacre of March 1960 and the banning of the ANC shortly thereafter resulted in Nelson Mandela going underground, the ANC shifting towards a policy of armed struggle, the, eventual arrest of the majority of the ANC leadership and the Rivonia Trial of 1963-64 that saw Kathrada, Nelson Mandela and numerous others sentenced to life imprisonment.

“The real picture of prison life is a picture of great warmth, fellowship, friendship, humour and laughter; of strong convictions, of a generosity of spirit, of compassion, solidarity and care. It is a picture of continuous learning, of getting to know and live with your fellow beings, their strengths as well as their idiosyncrasies; but more important, where one comes to know oneself, one’s weaknesses, inadequacies and one's potentials. Unbelievably, it is a very positive, confident, determined – yes, even a happy community’ – Ahmed Kathrada in ‘Memoirs’

Kathrada’s period of imprisonment was characterised by relative highs and lows, but he welcomed the 1969 decision by the ANC at Morogoro to open the ANC’s membership to all races, as he had found the ‘membership restriction both contradictory and humiliating’.

In 1974, Kathrada was sent to Cape Town for treatment by a dentist. He noted that he was unsettled by the mini skirts, bright fashions and long-haired men. At one point he saw a blonde-haired figure in the distance who he was convinced was his pre-trial girlfriend Sylvia. ‘At a distance, the blonde hair, the walk, even the figure, looked so much like her that my heart skipped several beats,’ noted Kathrada.

‘Imagine my devastation when this vision from my past came into focus and I realised that it wasn’t Sylvia, or even a woman… The moustache, only visible as we came face to face, was the final giveaway.’

The journey to freedom

In 1985, Nelson Mandela, Ahmed Kathrada and numerous other political prisoners were offered freedom by South Africa’s then-president, PW Botha, if they promised to renounce political activity.

They rejected these conditions and posed their own conditions of acceptance, these being: , - the government must renounce violence first; it must dismantle apartheid; it must unban the ANC; it must free all who have been imprisoned, banished or exiled for their opposition to apartheid; and it must guarantee free political activity.

Finally, on 15 October 1989, Kathrada was released from prison.

He noted, "Except for a few indelible memories, most of the first day has always been a blank.

"My most precious recollections are of my little grand-nieces and nephews clambering all over me, clasping their little arms around my neck, holding my hands, hugging and kissing this strange man they had never se but had learnt to love in absentia."

With the unbanning of the ANC, Kathrada was elected to the party’s National Executive committee in 1991 and made head of public relations.

In 1994 he was elected a Member of Parliament after the ANC won the country’s first democratic elections.

In 1997 he resigned from the NEC, and chose not to stand for Parliament in the 1999 election.

Return to the Island

Under a democratic dispensation, Robben Island was declared a National Monument.

In 1997, the Robben Island Museum was opened and Kathrada was elected chairman of its managing council.

The Ahmed Kathrada Foundation is Uncle Kathy's legacy to the nation.

It hosts regular events and programmes focused on Kathrada's deepest areas of concern, including youth affairs, non-racialism, and issues around the struggle of the Palestinian people. It also hosts an archive of related material.

The Isitwalandwe Award - the ANC’s highest possible accolade, awarded while he was still in prison.

Honorary Doctorate: University of Massachusetts, May 2000

Honorary Doctorate by the University of Durban-Westville, 2002