Student protests: Between a rock and a hard place 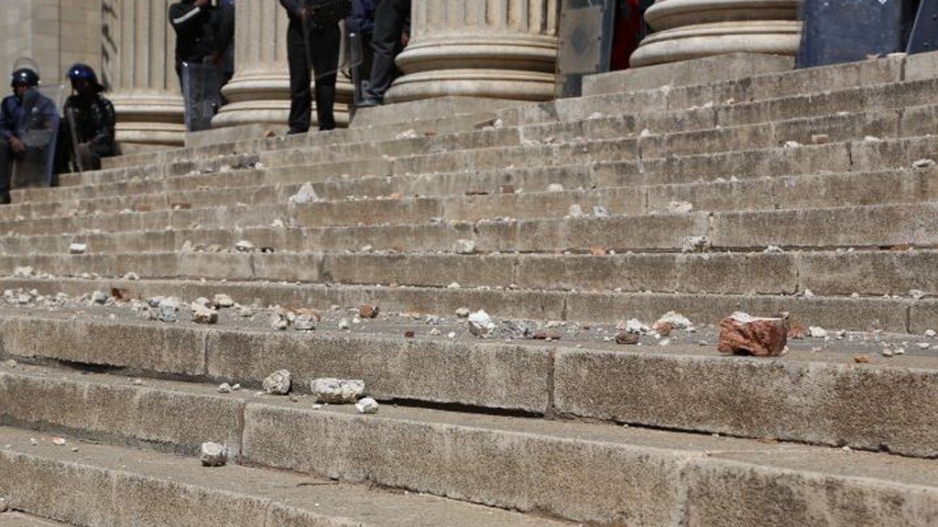 10 October 2016 - Rocks lie scattered on the steps of the Great Hall at Wits University on Monday, after violent clashes erupted between students and police over the fees saga.

JOHANNESBURG - Protests have erupted at all 26 of the countries’ institutions of higher learning.

Some have seen drastic disruptions to their academic programmes, while others have not.

Wits University in Johannesburg says classes will continue, despite violent disruptions on campus which then spilled onto the streets of Braamfontein.

IN PICS: Nzimande disturbed by violence at Wits

Student leaders say they weren’t involved in the burning of a bus or the looting of shops in Braamfontein on Monday.

They say they ended up on the streets of Braamfontein because police were chasing them out of campus.

They also criticised police for being heavy handed, and for putting the lives of students and bystanders in danger.

Students have retreated to Braamfontein as the police continue trying to disperse them. #Wits #FeesMustFall2016 pic.twitter.com/HIgQaZPgxO

Protesting students are adamant no academic activities will take place until an assurance of free education has been given. They want to hold an imbizo with management and other stakeholders.

Mediators at the institution, who say they support the students but cannot condone violence, are hopeful the proposed meeting will resolve the impasse over fees.

Meanwhile, in a roundup of what’s happening at the rest of the country's universities, the University of Pretoria remains closed, with protesting students there calling for a General Assembly to map the way forward.

Students say they are refreshed from the spring break & ready for a second wave of protests up until they meet with VC. #fees2017 pic.twitter.com/q2wQx9YKtD

The institution opened after a two-week spring break but engagements didn't go according to plan.

Students disrupted a meeting between management and stakeholders, insisting their future could not be decided without their input.

Meetings scheduled by #UP are not going according plan. Students have disrupted this meeting, staff members seen walking out. #Fees2017 pic.twitter.com/ZakxDAnU7f

Another meeting held with academics has been disrupted. #UP #fees2017 pic.twitter.com/Ow988OloIZ

Some students also staged a protest outside the Hatfield campus, after police and private security refused to let them in.

Scenes outside #UP. #Fees2017 pic.twitter.com/dYLaDbkX2V

Protests at the University of KwaZulu-Natal (UKZN) have seen lectures suspended at two of its campuses until further notice.

Police and students clashed at the Pietermaritzburg campus on Monday evening.

The confrontation came after a group of protesters overturned a vehicle on campus. Police fired rubber bullets and tear gas at the protesters. The students retaliated by pelting police with stones.

Earlier in the day, students clashed with private security at the university's Westville campus. They threw rocks at police and overturned a security van.

#UKZN fridges are blocking the entrance to the residence pic.twitter.com/d0WLaKRD4X

Police fired rubber bullets to disperse the crowd. Several arrests have been reported.

The students had disrupted classes earlier.

Lectures at the Howard campus have also been suspended.

Meanwhile, 11 UKZN students will be spending more nights behind bars before they find out if they've secured bail. Their bail application was postponed for the third time after they appeared in the Pietermaritzburg Magistrate's Court on Monday.

Nine were arrested during protests at the Pietermaritzburg campus last month - two others were charged days later. They stand accused of public violence, malicious damage to property and interfering with police duties.

Some supporters of #UKZN students blocked at court gate. Others already inside. pic.twitter.com/lyclA1q8t4

UKZN has an interdict that prohibits illegal and violent demonstrations.

The state has opposed bail on the grounds that the students could be disruptive, but their lawyers are arguing that more time in detention could jeopardise their studies.

Judgment will be handed down on Thursday - after just over three weeks in jail for some.

At Rhodes in Grahamstown, five students remain in custody after violent clashes with police on Monday.

They are part of a group that allegedly accosted a university lecturer because he had alerted police to their protest on campus.

Students to police: "Your children won't be able to come here. You live with that." #UCKAR #FeesMustFall2016

UCT says it’s still engaging with student leaders on when learning can resume. Officials are hoping the withdrawal of private security on campus will lead to positive discussions.

Management says residences will remain open along with other critical services.

Meanwhile, the UWC has called for national dialogue over the Fees Must Fall protests. Authorities believe that a solution can be agreed upon only after national and sector-wide discussions.

#UWC also closed for est of the week. #FeesMustFall https://t.co/8ebaVHHCFI

At Stellenbosch University, 12 suspended students have embarked on a hunger strike. They’re demanding the lifting of their suspensions.

The students have been banned from attending lectures and writing tests, pending the outcome of a disciplinary hearing.

Other students used fire extinguishers to disrupt classes and tests in an effort to stop academic activities. They were met with stun grenades and pepper spray. Some arrests were also reported.

JUST IN: Police use pepper spray to stop a group of students trying to gain entry to a closed building #Stellies #FeesMustFall #eNCA pic.twitter.com/3ckpGxeC3W

Students sing and continue calling for the remaining student to be let out. Police claim no one left inside #FeesMustFall #Stellies #eNCA pic.twitter.com/pGofjA4UN1

The university will continue with its academic programme today. It says the majority of its students are in favour of completing the academic year, following a survey conducted by the university.

More than 93 percent of students voted for classes to continue.

University authorities are adamant the academic programme will continue despite any protests.

It will soon be time for tough decisions to be made: whether or not to completely give up on this academic year or to try and pick up the pieces.

CEO of Universities South Africa Professor Ahmed Bawa says all closed institutions should try to open before the end of the week, warning that the implications could be severe if they do not.

Bawa also said President Jacob Zuma should be more involved in attempts to find a solution to the fee crisis.