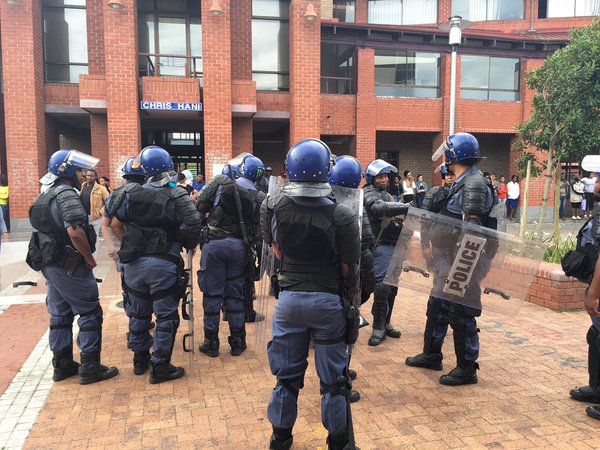 Police and students at the University of the Western Cape clash on 11 November 2015.

JOHANNESBURG – Students have been arrested at the University of the Western Cape after chaos broke out on campus on Wednesday afternoon.

A building on fire at UWCShutDown and fire fighters are here @eNCA pic.twitter.com/KjoosQ3fJL

Tensions broke out between protesting students and police with stun grenades, rubber bullets and rocks being used as both sides engaged in battle.

Five students were arrested on Wednesday morning for assault.

The university alleges that the students threatened a female worker at knife point and assaulted her.

As protests intensified, more students were taken in by police as the number grew to nine by the evening. Buildings were destroyed and some were set on fire during the protest.

URGENT ANNOUNCEMENT: In light of today&39;s protest action on campus, the exams from tomorrow (Thursday) to Saturday will...

Posted by UWC Online - University of the Western Cape on Wednesday, November 11, 2015

The ongoing situation at the university has prompted management to cancel exams that were due to be written from Wednesday to Saturday.

“In light of today&39;s protest action on campus, the exams from tomorrow (Thursday) to Saturday will have to be cancelled,” the university said in a statement posted on their Facebook account.

“A further detailed communication will be sent to all users via e-mail and posted to UWC&39;s website and social media pages once discussions are concluded later tonight with regards to the examinations as well as campus operations.”

One of the 8 students arrested right now at UWCShutDown @eNCA pic.twitter.com/uW5ALPh2tb

Police presence at UWCShutDown. No signs of it dying down @eNCA pic.twitter.com/6UUxxqrSHd