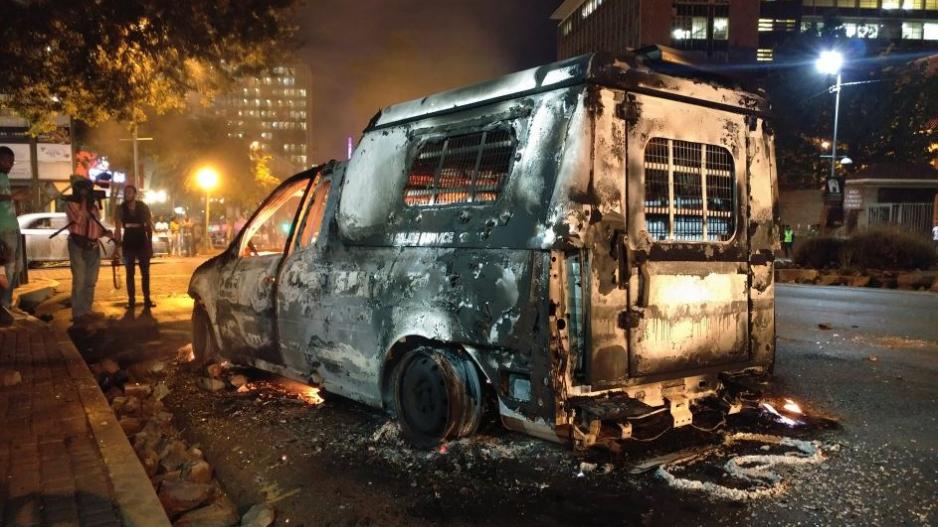 The remnants of a Parkview police station van torched in Braamfontein.

JOHANNESBURG – Protests have again erupted in Braamfontein in central Johannesburg.

According to JMPD spokesperson Edna Mamonyane, purported students were throwing rocks at a Rea Vaya bus at the corner of  Jorissen and Rissik streets in Braamfontein.

They forced the driver off the bus and then burnt it.

A bus burning in Braamfontein, near Cosatu House. A bus was set alight. #Braamfontein pic.twitter.com/HcSKUxM0ng

No commuters were on the bus at the time and no injuries were reported.

There have been no arrests

Police van has been set on fire in Braamfontein, opposite Wits School of Arts. #enca pic.twitter.com/RvAl20K9nu

Earlier, they blocked major roads, including the busy intersection of Jan Smuts Avenue and Jorissen Street, during peak-hour traffic.

Motorists took to social media to voice their frustrations.

Some frustrated motorists in Braamfontein this afternoon pic.twitter.com/1jTeDjKawK