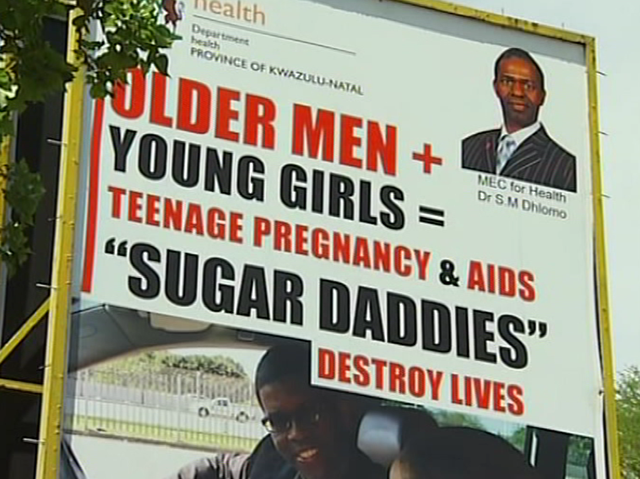 GAUTENG - The sugar daddy phenomenon has been listed as one of the factors that contribute to teenage pregnancy. This emerged at the presentation by the Department of Social Development of a study known as Factors Associated with Teenage Pregnancy in Gauteng.

The study suggests that issues of culture - where teenagers are subjected to family pressure; girls wanting to prove their womanhood and lack of parental guidance - also contribute to the rate of teenage pregnancy.

“In Gauteng it is basically the pressure in terms of the families. There’s pressure in the family such that children will want to go and enjoy themselves through sexual activity which results in pregnancy,” said Gauteng Social Development MEC Nandi Mayathula-Khoza.

The study surveyed some 500 pupils from across the province. Teachers and parents were also interviewed in focus groups to try and determine the main causes of teenage pregnancy.

It was found that some psycho-social factors contributing to the problem included youngsters seeking love as a result of lack at home.

“The teenagers are looking for love from older people who will actually provide them with money to buy stuff...,”said Mayathula-Khoza.

School goers interviewed were all in high school and aged between around 13 and 18.

The study shows that poverty in most instances leads young girls to seek financial security from older people. The department is now providing dignity packs containing toiletries to girls and boys, as well as providing uniform and exempting poor scholars from paying school fees.

Another move by government to prevent teenage pregnancies is offering pupils transport to avoid hitch-hiking and receiving lifts from older men.

“You know what comes with a girl hiking to and from school on a daily basis – there are those risks that are also associated with you women falling in love in some instances for the sake of transport and all of those things,” said Social Development Head of Department, Shoki Tshabalala.

Another factor contributing to teenage pregnancy was identified as households where teens are not supervised by parents making them vulnerable to pregnancy and sexually transmitted diseases. The department says in addition to the problem, most young girls do not know about their options.

“Not knowing about abortion is a worrying factor. Whereas there is a policy in South Africa of choice that people who get pregnant and for particular reasons do not want the baby - they have a choice whether to keep the baby or not,” said the MEC.

The national Department of Social Development has now commissioned the study in four other provinces. Limpopo, Eastern Cape, Mpumalanga and KwaZulu Natal have already begun research. The department wants the study done in all nine provinces for a national outlook.