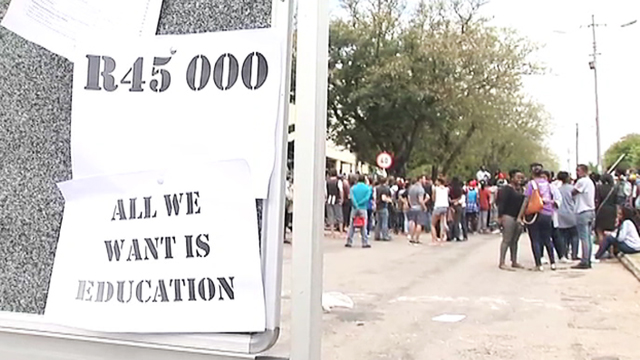 Grahamstown, 19 October 2015 - There was a complete academic shutdown at Rhodes University on Monday, as students protested over fees.

JOHANNESBURG – South Africans across the country have begun rallying in support of students, with some offering counseling, legal assistance and food supplies for protesting students.

Graduates and alumni from various universities across the country have offered help on social media platforms.

Equal Education, the Legal Rescource Centre, the National Association of Democratic Lawyers (NADEL) are among those offering assistance to students.

The Higher Education Transformation Network has called on all lawyers willing to offer assistance by submitting their names to a legal database.

"The Network is finalising a database of progressive legal minds who are willing to assist the plights of arrested protesting students on a pro bono basis. The database will also consider interceding in cases of unfair interdicts etc," the organisation said in a statement.

Pro-bono lawyers helped secure the release of students arrested in Cape Town last night and continue to appear on behalf of students who remain in prison.

This after police arrested 29 students who forced their way into Parliament on Wednesday. Twenty three students were released on a warning on Wednesday night. They were charged with public violence.

Six remaining students facing charges that include contravening the Gatherings Act and tresspassing appeared in the Cape Town magistrates court and have been released on warning.

They will appear in court in February.

Other former students have offered to help students study for upcoming exams.

Using the hastag Graduatesforthecause, university alumni are collecting donations of bottled water, food, time and other resources for students.

Donors have been encouraged to drop supplies off at the Chez Hotel Inn in Corlet Drive.

Former Wits student Puseletso Matenche is co-ordinating the initiative and said she started it because the cause resonated with her own situation.

"I was at Wits. I graduated last year... I really did think the fees were quite high. My mom was a single parent and I was a travelling student. My mom managed (to pay the fees) but it was quite a struggle," she said.

The initiative is calling for mathematics tutors to help students studying for upcoming exams.

A Facebook group called “Alumni and former students in support of FeesMustFall protest” are posting information for those who want to support students.

The group has posted information about locations for water and food drop-offs for various universities including:

Religious leaders have gone to Wits University to pray with students.