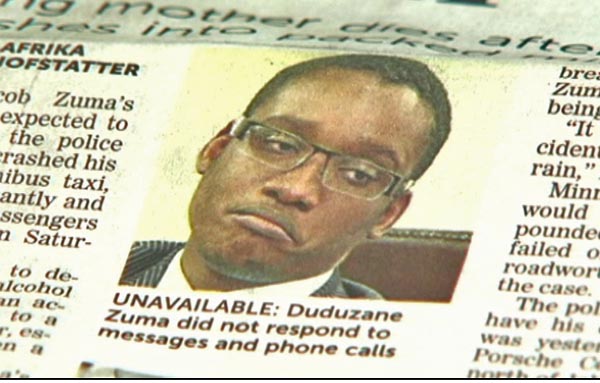 JOHANNESBURG - Suspicion is growing over the police&39;s handling of Duduzane Zuma&39;s involvement in an accident, in which a woman was killed and two others critically injured.

30-year-old Phumzile Dube was killed in the accident, last Saturday night on Grayston Drive in Sandton, when President Jacob Zuma&39;s son allegedly crashed into a taxi.

The taxi driver and a 72-year-old woman were critically injured and taken to a nearby hospital.

Johannesburg metro police spokesperson, Wayne Minnaar said Zuma was not given a breathalyser test because he did not show any signs of being intoxicated.

"The officer did come to the conclusion that both drivers were sober. A breathalyser test only gets administered to confirm an officer’s suspicion, before a blood sample gets drawn which then gets analysed," he said.

Senior Johannesburg metro police officer, Edna Mamonyane said it was standard procedure for any driver involved in a fatal accident to be charged with culpable homicide.

Zuma has not been charged but he is expected to be questioned by police this week.

Caro Smit from SA Against Drunk Driving said: “If the person appears to not be impaired for alcohol then they should still take the blood. That’s what they should be doing – especially if there is a death or serious injury.”

The Democratic Alliance has asked the Independent Police Investigative Directorate to look into the conduct of the police officers at the scene.

Zuma has insisted he does not drink alcohol.