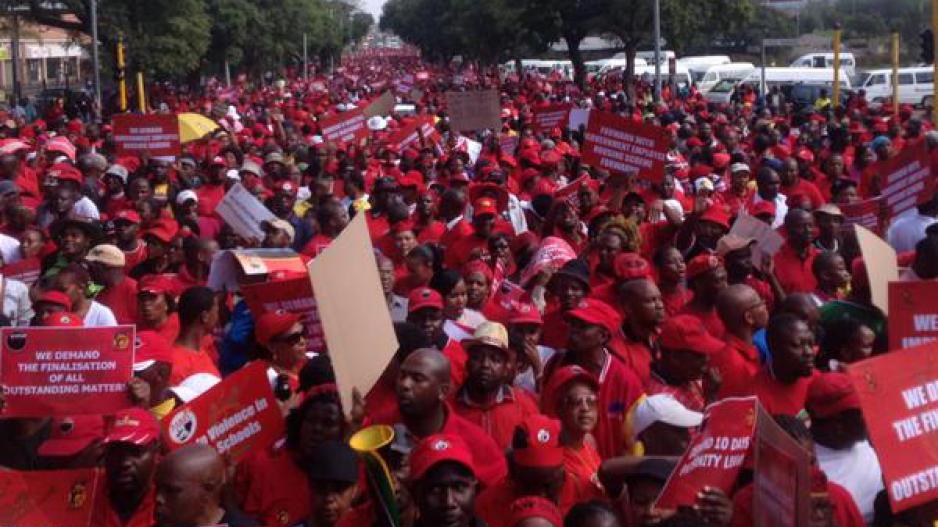 Thousands of members from Sadtu, Popcru and Nehawu marched in Pretoria, calling for a 10 percent wage increase and R1,500 housing allowance.

JOHANNESBURG - The South African Democratic Teachers Union (Sadtu) on Friday accused President Jacob Zuma of “rewarding mediocrity” after he moved Faith Muthambi from the Communications Ministry to become the minister of public service and administration in a cabinet reshuffle that has drawn widespread criticism and condemnation.

The affiliate of the Congress of SA Trade Union (Cosatu) said the move was “ill-advised and defied logic”.

“As a union that represents over 70 percent of education workers in this country, we have played our part over the last few years to help develop and sustain labour peace in the sector. We are thus shocked that against this background, the president appoints an individual who had spectacularly failed in her previous portfolio into the Public Service and Administration Department,” the union said.

We believe that by appointing an under-performing Minister,President has spit on the faces of all public servants #Muthabi @SA_Labour_News

“The decision by the president indicates that we have a government that rewards mediocrity and that there are no consequences for those who fail to deliver. The president through this bizarre decision has failed to show any appreciation and sensitivity for labour peace in the public service.

He has essentially taken one of the worst-performing ministers in the current administration and given her the task to be one of the key drivers of the developmental state agenda, a task which she will most likely fail in given her dismal track record.”

Sadtu accused Zuma of abusing his constitutional prerogative to appoint ministers to further his agenda by promoting “internal factional battles” and not promoting a developmental state.

The rand tanked overnight as speculation over the changes in the country’s national executive raged on.

Zuma announced 10 changes to the cabinet and 10 more at deputy minister level.

Apart from Gordhan, Tourism Minister Derek Hanekom, who last year mooted a vote of no confidence in Zuma at the ANC national executive committee, was also axed from cabinet.

Hanekom said he had found out he had been sacked only from media reports and that no reason had been advanced.

Sadtu said it would not be silenced when the public service was “plunged into chaos by the appointment of an incompetent minister”.

READ: Calls for quality private education for all

“Organisations elect and should be led by collectives and not individuals. Cults of personality destroyed many revolutions in the past. The ‘strong and big man’ mentality should be challenged lest we degenerate and be judged cruelly by history…George Orwell once warned us and said, ‘Power corrupts and absolute power corrupts absolutely’,” the union said.