The lighter side of Ramaphosa's election day 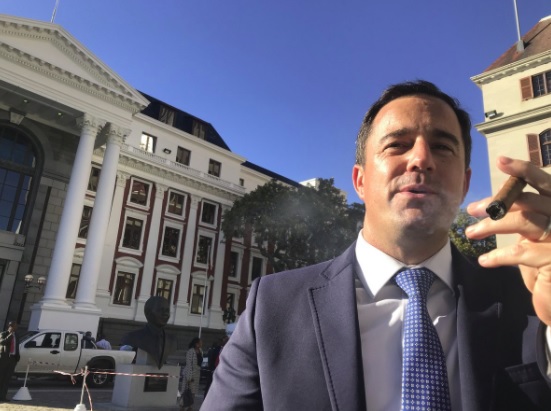 While Ramaphosa's own Minister's might not have been there to wish him well on the Day he was elected President, DA chief whip John Steenhuisen shared a cigar with Ramaphosa that he had saved for "a special occasion."

JOHANNESBURG - Cyril Ramaphosa was elected as President of South Africa on Thursday, but some key players missed the proceedings, raising some eyebrows.

Notably missing on the day were Bathabile Dlamini, Minister of Social Development, as well as Mosebenzi Zwane, Minister of Mineral Resources.

Conspicuous by her absence. But I see a couple of other open seats there. Maybe some know the new broom is going to sweep clean, & quickly. Maybe they&39;ve already cleaned out their proverbial desks & are just waiting for the axe to fall. ? https://t.co/dkmpIDaCag

Dlamini is under fire for her role in the Sassa social grants debacle with an inquiry underway to determine whether she should personally pay for the Constitutional Court case on social grants.

READ: Dlamini contradicts herself under oath

Zwane has been linked to the contentious Vrede dairy farm project in the Free State (he was MEC for Agriculture in the province at the time of the project&39;s launch).

On Wednesday a number of people were arrested by the Hawks for their ties to the project, and on Thursday, the Hawks confirmed that Ajay Gupta is not a fugitive of the law and on the run.

While Ramaphosa&39;s own Minister&39;s might not have been there to wish him well, DA chief whip John Steenhuisen shared a cigar with Ramaphosa that he had saved for "a special occasion."

DA chief whip @jsteenhuisen allowed me to post this. Says he’s been keeping it for a special occasion. He gave one to President Ramaphosa too. pic.twitter.com/XL7q31cM2f

Meanwhile, Finance Minister Malusi Gigaba was in Parliament for Ramaphosa&39;s election but was glued to his tablet.

It was reported that Gigaba was playing Candy Crush while ANC Chief Whip, Jackson Mthembu was speaking.

He&39;s said to have put the game away when President Cyril Ramaphosa began giving his speech.

Gigaba is rumoured to be one of the Cabinet Ministers who might get the boot, now that Ramaphosa is officially elected as president of the country.

TWITTER SPEAKS: Who will be in President Ramaphosa&39;s new cabinet?

When you just have to beat that high score no matter the occasion. -- https://t.co/9ntzesRqEq

It was Ramaphosa&39;s day though on the whole and as he was appointed President, he was congratulated with a kiss, a resounding round of applause, and vocal singing, and even the Rand celebrated.

The moment Cyril Ramaphosa is elected President of the Republic of South Africa. PresidentElection pic.twitter.com/ciO7jYjwjv

A short while go after President Ramaphosa was sworn the Rand vs US dollar ----. While this is a good confidence booster, the biggest challenge is ahead for sustained economic recovery. pic.twitter.com/KFEYT0xMo3

[MUST WATCH] Cyril Matamela Ramaphosa is sworn in as the new President of the Republic of South Africa. He is SA&39;s fifth democratically elected president. Courtesy DStv403