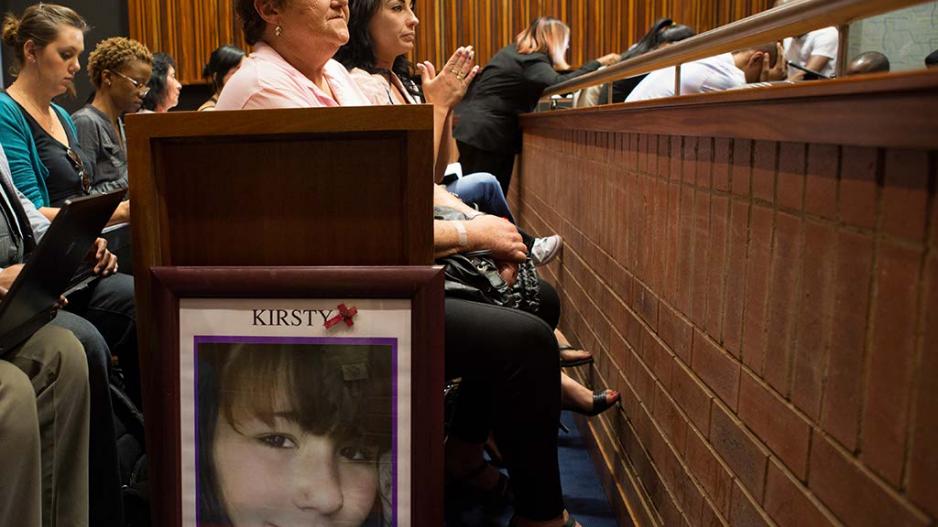 Members of Kirsty Theologo's family sit and wait for court proceedings to resume at the Palm Ridge Magistrate's court. Two suspects have already pleaded guilty to Theologo's murder and the four additional suspects are currently on trial.

JOHANNESBURG - On the night of 21 October 2011, Kirsty Theologo was strangled and fell to the ground. She managed to get up and was strangled once again – until she “passed out.”

A South Gauteng High Court, sitting in the Palm Ridge Magistrate’s Court in Ekurhuleni, heard testimony on Tuesday from Robin Harwood, who is one of the four people on trial for her murder.

Courtney Daniels, Robin Harwood, Harvey Isha and Lindon Wagner have already pleaded not guilty to murder, attempted murder, and assault with the intent to cause grievous bodily harm.

Two others, Lester Moody and Jeremy King are already serving sentences for their part in the killing. They both entered into a plea agreement with the state and were sentenced to 17 years behind bars, five of which were suspended.

Theologo died following an apparent satanic ritual in which she and her then 14-year-old friend were doused with petrol and set alight.

In his testimony, Harwood told the court that he was controlled by an evil spirit during the incident.

Judge Geraldine Borchers asked Harwood why he believed that and he replied, “because we were experimenting about the dark world and evil.”

Harwood told the court that he strangled Theologo and in the moment they both fell to the ground.

"Jeremy then choked and strangled her from behind. I think that&39;s the time she passed out," he said.

Dressed in a white jersey and standing behind the witness box, Harwood said after Theologo had been strangled and was unconscious, the group sat around with candles and others cut their hands with knives.

He described how before Theologo and her friend were doused with petrol, Wagner dropped a rock on her head, but he added he didn’t know Theologo would die.

“What did you think would be the sacrifice?”, asked Judge Borchers.

“I knew she was the sacrifice but I didn’t know she would die", he replied.

Harwood has also told the court that at the time of the incident, he was a heavy dagga smoker which has affected his memory.