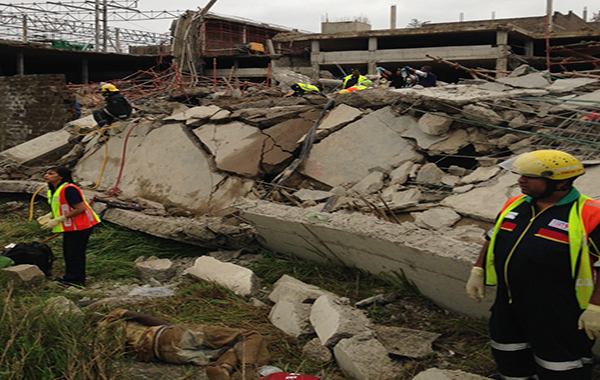 KwaZulu-Natal, November 19 A body lies on the ground in front of a construction site that has collapsed in Tongaat, northern KwaZulu-Natal. It is reported that a number of people are trapped under the rubble.

KWAZULU-NATAL - At least one person has died and 17 others have been injured in a construction site collapse in Tongaat, in northern KwaZulu-Natal.

According to KZN police spokesperson Thulani Zwane a woman who was a construction worker at the site lost her life. At the time that eNCA.com obtained pictures from the scene, the woman&39;s body had not been removed by officials.

Meanwhile, earlier, paramedics on the scene reported that an estimated 50 people were believed to be trapped. They could not elaborate on the extent of injuries suffered.

Netcare 911 spokesman Chris Botha said the incident occurred late on Tuesday afternoon and that all emergency services from the area, including search and rescues teams, were on the scene. It&39;s believed at least 100 search and rescue officials are still on scene.

An eyewitness said it appeared as though "the back wall of the mall collapsed." The source is known to eNCA.com but wanted to remain anonymous.

According to a website, at completion, the mall is expected to be at least 15, 000 square metres and will house 40 retail stores. It is due to open in April 2014. Intended key tenants were noted to include Spar, Clicks, Pep, Ackermans, Jet and Mr. Price, as well as Absa Bank and Standard Bank.